FAKE DUCK vs. SAVE THE DUCK: Likelihood of confusion of figurative marks

The term FAKE has been in use not only since ‘Fake News’. The CJEU has now confirmed the likelihood of confusion between the marks FAKE DUCK and SAVE THE DUCK, both figurative marks registered for fashion and clothing.

The dispute arose as a result of the application for registration of the term FAKE DUCK as a Union figurative mark by Itinerant Show Room Srl (Italy) – although the earlier Union figurative mark SAVE THE DUCK of Save the Duck SpA (Italy) had existed for a longer period and identical or very similar goods and services were claimed by both marks ( in Nice classes 18 ‘suitcases’ and 25 ‘clothing’). SAVE THE DUCK is a well-known trademark, especially in the fashion and clothing sector. Accordingly, Save the Duck SpA filed an action against the trademark application FAKE DUCK and claimed likelihood of confusion.

The Board of Appeal upheld the application and confirmed the likelihood of confusion. The applicant for the FAKE DUCK trademark refused to accept this and brought the case before the European Court (Court of the European Union, CJEU), which has now ruled on this trademark dispute. It is true that the two marks in dispute both show the motif of a duck (in English: duck) together with the writing. However, there are also differences between the pictorial motifs and also between the ducks. 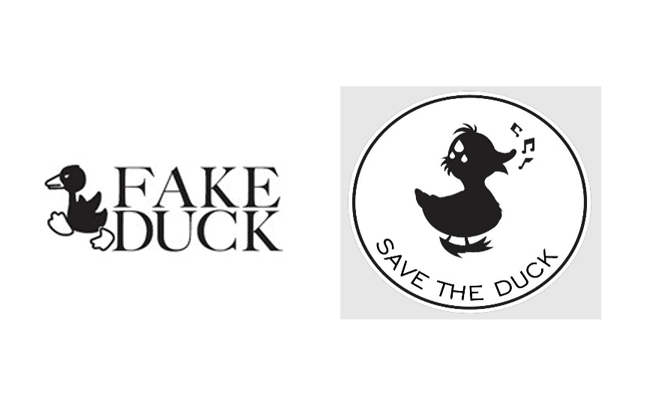 Dominance of the elements is often decisive

In such cases, it is often due to nuances in how similarity is assessed. In cases of word and figurative marks (as in the present case) the dominance of the elements is important (see the Gastivo case , Black label vs. Labell or the eagle figurative mark in the fashion sector). Even in figurative marks which do not have proper word elements, there may be phonetic or conceptual similarities (see figurative marks “OO” or winged griffin vs. bull). In pure word marks, on the other hand, it is not only about dominance but also about syllable lengths and positioning of the same word elements (Pink Lady vs. Wild Pink or POST vs. InPost).

Therefore, before the CJEU, the similarity between the two marks was again assessed in detail. The European Court found an average degree of visual similarity. The dominant elements of both marks are the representation of the duck and the word elements, the CJEU explained. And the differences in the representation and position of the duck claimed by the applicant were difficult to perceive and therefore to be considered negligible.

The circular frame and the square background of the earlier mark were found to be only slightly distinctive.

Phonetically, there is even a high degree of similarity between the marks at issue, the CJEU added, pointing out that the word elements ‘save’ and ‘fake’ produce very similar sounds and that ‘duck’ is in any event identical and positioned at the end of the two word chains.

Similarity leads to likelihood of confusion

A proven similarity between two marks in dispute must always be considered in the overall context. The similarity of the goods in question and similar sales channels must also be taken into account in order to establish a likelihood of confusion, as must any highly distinctive character of the earlier mark, that is to say, a common knowledge of the earlier mark.

Those factors were also in favour of the earlier mark SAVE THE DUCK, which has a highly distinctive character for fashion and clothing, which is not disputed by the applicant. The similarity of the goods and services claimed was also not disputed.

However, the applicant submits that the Board of Appeal failed to take account of the conditions of purchase of the goods in question.

That plea was rejected by the CJEU. The Court found that customers generally choose clothing themselves and, above all, visually and before purchasing it. The visual aspect is therefore of greater importance in the global assessment of the likelihood of confusion.

The action was therefore dismissed in its entirety and the likelihood of confusion found by the Board of Appeal was confirmed by the trademark application FAKE DUCK also at this instance.

Are you looking for advice on trademark law or design protection?

Our patent and law firm has many years of expertise in the protection of trademarks, designs and patents, both nationally and internationally.
If you are interested, please contact us!