No likelihood of confusion: POST, INFOPOST and ePOST vs InPost

The CJEU sees no likelihood of confusion for Deutsche Post AG and its protected earlier trademarks POST, INFOPOST and ePOST by the trademark application InPost. The reasoning shows: if “in” is not used correctly in grammatical terms, it serves to differentiate brands.

Deutsche Post AG suffered a severe defeat before the Court of Justice of the European Union (CJEU). The Court found that the EU figurative mark application InPost filed by the Polish-based company Inpost sp. z o.o. with the EU Intellectual Property Office (EUIPO) in July 2012 did not constitute a likelihood of confusion or exploitation of the earlier known marks. In November 2012, Deutsche Post AG filed an opposition, invoking both the national earlier word mark “POST” and the earlier EU figurative marks INFOPOST and ePOST.

Plea 1: likelihood of confusion with regard to identical services

The applicant specified its allegation that the figurative element of the mark applied for is not distinctive for the services in question and that the word element „in“ does not lead to any substantial differences between the signs in question. On the contrary, it is precisely the fact that a later mark consists exclusively of an earlier mark and another word element which indicates that the two marks are similar, according to Deutsche Post AG (Judgment of 4 May 2005, Reemark v OHIM – Bluenet (Westlife), T-22/04, EU:T:2005:160). The CJEU did not want to accept this argument, certainly not in this generally interpretable wording.

„Post“ may be similar, but “in” makes the difference 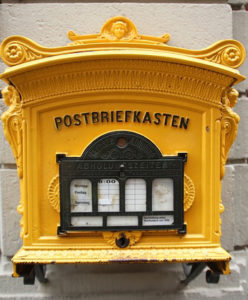 The CJEU first pointed out, in principle, that the average consumer generally perceives a mark as a whole and does not analyse its various details.

In the present case, the Board of Appeal of EUIPO considered that the signs in question were to some extent similar visually, acoustically and conceptually, since they divided the word element “post” but differed by the black and yellow envelope symbol and the word element “in” at the beginning of the mark applied for. In addition, optical differences result from the arrangement of the various elements of the figurative mark.

No special attention is paid to the word element “in”, since it is a preposition and a prefix which are ubiquitous in the German language and therefore have a very low degree of distinctiveness. However, the word element “in” is not used as a preposition or prefix in the mark applied for. Therefore, this combination has a rather abstract meaning, because the combination of the elements “in” and “post” is grammatically unusual for the German consumer and is not perceived as an expression with meaning. 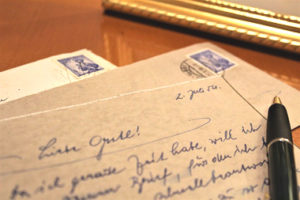 No likelihood of confusion between the mark applied for and the earlier EU figurative mark INFOPOST: The Court also saw no similarity between the word element „in“ and „info“. The word element „info“ at the beginning of the earlier EU figurative mark INFOPOST is understood by the relevant public as „information“, which gives rise to a conceptual difference between it and the mark applied for.

The CJEU therefore ruled that the signs in question have little similarity but, despite the common element of „post“, they show considerable visual, acoustic and conceptual differences. There is no likelihood of confusion with regard to identical services.

Plea 2: Unfair use of the well-known earlier mark

By its second plea in law, the applicant alleged that the good reputation of the earlier mark had been unfairly exploited (infringement of Article 8(5) of Regulation No 207/2009).

When is an earlier trademark fully protected?

In order for an earlier trade mark to enjoy the broader protection provided for in Article 8(5) of Regulation No 207/2009, a number of conditions must be met.

Since these terms are cumulative, failure to comply with any of these terms will be sufficient to render this provision inapplicable.

In addition, the Board of Appeal took account of all aspects of the word „post“ in its reasons for the contested decision. The applicant cannot limit the use of the term „post“ to postal services covered by the earlier national word mark POST. Because “Post” is also a German term with a meaning like postal services in general.

The European Court therefore also rejected the second plea. The action brought by Deutsche Post AG was dismissed in full.