Adidas loses important trademark litigation over the famous 3 strip trademark before the European Court. The CFI rejected the inverse colour representation of the mark as evidence of use of the mark and thus also denied distinctiveness through use. 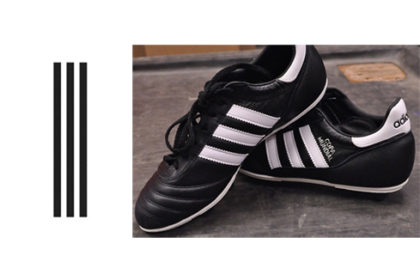 This was not the first time Adidias had been brought before a court to defend the famous figurative mark with 3 stripes. But on Wednesday the German sports manufacturer lost in a nullity suit against the European figurative mark of the 3-stripe mark before the European Court of Justice (Court of First Instance, CFI). This ruling (EU:T:2019:427) can open the floodgates internationally for legal action against the 3-stripe mark.

The ruling of the CFI has far-reaching consequences for all brand manufacturers. In the grounds of its judgment, the Court of First Instance, like the Board of Appeal of the DPMA, rejected the inverted colour representation of the Adidas mark, namely the representation of three white stripes on a black background. This is contrary to other judgments concerning the inverse colour representation of a trade mark and in the present case led Adidas to defeat before the CFI. Since the Court of First Instance did not accept the evidence of the mark in inverse colour, it also rejected the distinctive character of the mark through use of the mark (under Article 7(3) and Article 52(2) of Regulation No 207/2009 (now Article 7(3) and Article 59(2) of Regulation No 2017/1001). The EU figurative mark of Adidias (No 12442166) is declared invalid due to lack of distinctive character.

Reference to other judgments was rejected

The Court clarified that, for reasons of legal certainty and sound administration, the examination of an application for a declaration of invalidity must be rigorous and comprehensive in order to prevent trade marks from being registered inadmissibly. Registration of a sign as a trade mark depends on certain criteria which must be assessed in the light of the factual circumstances of the case, the Court of First Instance held. This examination must be carried out on a case-by-case basis. Accordingly, Adidas cannot rely on other judgments concerning inverted colour representations or on other judgments relating to the Adidas mark confirming the protection of the 3-stripe mark, including for different ways of using the mark.

Forms of use of a trademark admissible as proof

In that regard, Adidas claimed that the Board of Appeal had erred in its assessment, which it had inter alia held:

(i) where a mark is very simple, even a slight difference could lead to a significant change in the characteristics of the mark as registered;

(ii) the use of the mark in question in the form in which the colouring is reversed necessarily alters the distinctive character of that mark;

The CFI rejected this challenge. The simpler the mark, the less likely it is to have distinctive character and the more likely it is that an alteration of that mark will affect one of its essential characteristics and the perception of that mark by the relevant public, the CFI held. Moreover, Adidas did not contest “the extremely simple character”, as the Court of First Instance stated.

The CFI clarified that the Adidas mark in question was registered in black and white without any particular colour claim. However, it is for the applicant to file a graphic representation of the mark which corresponds precisely to the subject-matter of the protection sought. Once a trade mark has been registered, the proprietor is not entitled to more extensive protection than that afforded by that graphic representation (see judgment of the Court of First Instance: Red Bull cannot protect the desired colour mark).

However, since the mark in question is a figurative mark without a word element and with very few characteristics, the use of three black stripes on a white background and the inherent contrast is an essential characteristic of the mark, namely the contrast between the three black stripes on the one hand and the white background and the white spaces between those stripes on the other. Inverted colouring cannot therefore be described as a slight difference from the registered form of the mark in question, the Court of First Instance held.

The applicant Adidas also argued that the contested mark was a “pattern” mark. The only function of the graphic representation of the mark at issue is to represent a design consisting of three parallel equidistant stripes, irrespective of the length of those stripes or the way in which they are cut, argued Adidas. The CFI confirmed that the EUIPO Guidelines (before the entry into force of the Implementing Regulation 2017/1431) stated that a “figurative mark” could be regarded as a “pattern” mark if it “consists exclusively of a series of elements which are regularly repeated”. But that is not the case with the Adidas 3-stripe mark, which is an ordinary figurative mark, was ruled by the court.

Evidence of use in five EU countries

By excluding the inverted colouring and variations of forms from evidence of use of the brand, many proofs of Adidas were not recognised. The only evidence of use of the Adidias 3-stripe mark of some relevance to the court was in five EU countries. The applicant Adidas argued that, according to the case-law, evidence does not have to be provided for each Member State. Although this is correct, the CFI confirmed, it applies above all to comprehensive distribution networks or similar knowledge of the trademark due to its geographical, cultural or linguistic proximity. In this case, however, it is common ground that the mark in question is inherently devoid of any distinctive character throughout the European Union. Therefore, such a review should also be carried out throughout the whole territory of the EU.

International flood of lawsuits against Adidas?

The ruling can open the floodgates for legal action against Adidas’ 3-strip brand, Dr. Tim Meyer-Dulheuer of our law firm Dr. Meyer-Dulheuer & Partners LLP is quoted in the American business magazine Fortune, among others. The effect of this judgement is enormous. If Adidas is not able to fully protect the famous brand in Europe, they will have the same problem elsewhere, in the United States and in Asia. Examples of actions about the adidas three stripes are adidas vs. NIKE (Flyknit 2017, USA), adidas and trefoil logo (Japan, 2018),  adidas vs. Sketchers (USA, 2018) and adidas against free-riding (adidas against 2-striped shoe of Shoe Branding Europe BVBA, 2018). Spicy, the intervener in the present invalidity proceedings against adidas is also Shoe Branding Europe BVBA. However, Adidas still has an open path to the next instance, the European Court of Justice (ECJ).