A two-striped shoe is too similar to a three-striped shoe: Adidas successfully defends its three stripes on shoes before the European Court of Justice. The CFI considers today in its ruling the existence of a genuine risk of free-riding.

Today’s case concerns a long-standing dispute over the registration of an EU figurative mark consisting of two parallel stripes on a shoe. Since adidas AG considered this to be too similar to the earlier EU trade mark of its famous three-striped shoe, adidas relied on the full protection provided for in Article 8 (5) of Regulation No 207/2009. adidas examined the two trade marks in question carefully to establish a possible link and confirmed today that the mark in dispute could unfairly exploit the good reputation of the earlier mark.

Stages of this lawsuit

In December 2011, the plaintiff Shoe Branding Europe BVBA applied for an EU figurative mark for “Safety shoes for protection against accidents and injuries” (Class 9 goods). The requested application for the EU trade mark was published in the Community Trade Mark Bulletin No. 59/2012 dated 26 March 2012. In May 2012, adidas AG filed an opposition to this trademark registration with reference to its own EU figurative mark for “shoes” of Class 25 (No. 3517646), which has been registered since 2006.
In October 2014, the EUIPO Opposition Division dismissed the appeal and adidas appealed against this decision.
In November 2015 (“contested decision”), the EUIPO Second Board of Appeal confirmed adidas’ appeal. In particular, certain similarity between the two marks was confirmed by the Second Board of Appeal and, given the high reputation of the earlier mark, it was also presumed that the contested mark applied for could unfairly exploit the good name of the earlier mark. In turn, Shoe Branding Europe BVBA sued against this decision, so that the case has now been decided before the European Court of Justice.

I) Firstly: the use of the mark applied for is not in any way liable to unfairly use or prejudice the distinctive character or appreciation of the earlier mark. 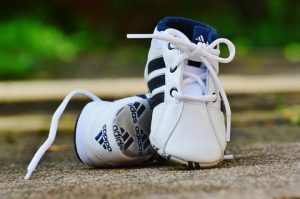 Decisive for the findings such as the good reputation and also the similarity between the marks is always the question of whether the relevant public establishes a link between these two marks. The following factors should be taken into account in the need for a link between the marks in question:
1. the nature and degree of proximity or dissimilarity of the goods or services in question
2. the degree of similarity between the conflicting marks
3. the strength of the reputation of the earlier mark
4. the degree of distinctiveness of the earlier mark

Taking into account all the relevant factors of the case, the ECJ today found that the evidence provided by adidas before the Board of Appeal was sufficient to demonstrate the existence of a genuine risk of free-riding.

Was there any reason to use the mark applied for?

II) Secondly, the applicant has a legitimate reason to use the mark applied for.

Shoe Branding Europe BVBA argued that the Board of Appeal did not examine its evidence for good reason. Furthermore, the marks in question would have existed alongside each other for several decades if adidas tolerated them. The applicant submits that evidence of the good reason was provided by submitting, in opposition proceedings, evidence proving that the mark applied for had been used for a longer period of time.

In its judgment delivered today, however, the Court of First Instance confirms that it failed to provide the applicant with evidence of the existence of a just cause. In addition, the Second Board of Appeal was right to conclude that the alleged coexistence of the marks in question had not been peaceful.
Accordingly, the second action of the first part of the second plea must be dismissed in its entirety.