FAKE DUCK is descriptive of fashion; in the meaning of “false duck feathers” it describes synthetic fillings in clothing, the CFI ruled. Registration of the figurative mark FAKE DUCK was therefore refused – although the identical word mark is protected as a Union trademark. 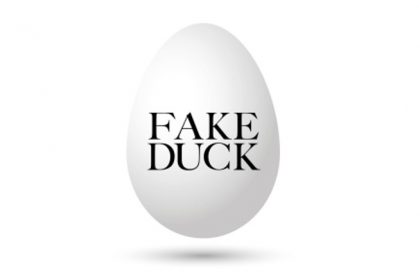 The applicant for the trademark registration of the sign FAKE DUCK is Itinerant Show Room Srl (Italy) – our regular blog readers already know from the trademark dispute FAKE DUCK versus SAVE THE DUCK.

Itinerant Show Room Srl is the owner of the Union word mark FAKEDUCK for goods in the fashion and leather goods sector.

Appeal before the European Court

Itinerant Show Room appealed against this decision before the European Court of First Instance (CFI). In particular, the applicant claimed that the inherent distinctiveness of the term “false duck” had not been duly taken into account. Furthermore, the complexity of the trade mark FAKE DUCK and of the design of egg had not been duly taken into account. Therefore, the applicant submits that EU Regulation No 2017/1001 has been misinterpreted.

The applicant submits that the Board of Appeal confined itself to translating or interpreting literally the expression ‘fake duck’ to ‘false duck’ without taking into account the perception of the mark applied for by the relevant public. The term FAKE DUCK contains various meanings, including, for example, contrary or rebellious. That shows the complexity of the mark, which has not been taken into account, according to the applicant.

Moreover, the mark applied for refers to a type of filling and not to a ready-made product and, in any event, the elements of the contested mark (fake, duck and the egg) are distinctive. In short, consumers would see the figurative sign FAKE DUCK as a ‘rebellious duck’.

But the European Court did not want to follow these arguments. The applicant has not put forward any arguments in support of its contention that the term could have more than one meaning. Nor has any evidence been adduced to support the applicant’s assertion that the image of the ice cream has a symbolic value and therefore goes beyond the combination of the elements. Furthermore, the Court held that the term ‘false duck’ was not a neologism, as the applicant claimed, but a juxtaposition of two descriptive terms in their usual grammatical form.

Moreover, all the goods covered by the contested mark are in the clothing sector. And, as regards those goods, the applicant submits that all products are likely to contain fillings in their lining, even if they are only fine fillings of animal or synthetic origin. Consequently, “false duck feathers” describe synthetic fillings in clothing, the CFI held that the term “fake duck” was therefore directly descriptive.

Figurative mark FAKE DUCK descriptive- but the word mark not

However, that argument was also rejected. It is true that, when examining an application for registration of a Union trade mark, EUIPO must take account of decisions already taken on similar applications, the CFI explained. However, an applicant for a sign as a trademark cannot rely on a possible illegality in favour of others for his own benefit in order to obtain an identical decision; each trade mark registration must be considered as an individual case, the CFI ruled.