In two days the Football World Cup in Russia starts – high season also for counterfeiting. With a new customs alliance China-Russia in 2018, both countries want to put a stop to product piracy. 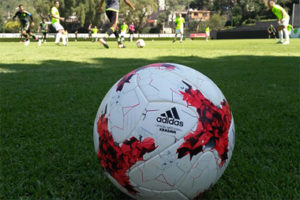 World Cup jerseys and shirts, soccer balls, soccer shoes and general sportswear of brand manufacturers: counterfeit goods and product piracy are a billion dollar business. For the German sports manufacturers Adidas and Puma, this means major losses. Every year, six to seven million counterfeit Puma products were confiscated, and 12 million counterfeit Adidas products were seized, the German newspaper “Süddeutsche” reported at the 2014 World Cup. To protect FIFA’s exclusive right to World Cup brands, logos and designs and to put a stop to the known increase in product piracy, two countries have joined forces in a cooperation whose rapprochement is also being observed with vigilance at the political level: China and Russia.

Customs Alliance between China and Russia

Since the first of March and initially for a period of four months, the so-called China and Russia Customs Joint enforcement action on the protection of intellectual property rights has been formed. The common goal is to strengthen the protection of intellectual property rights for FIFA and relevant sponsors. In particular, a risk assessment of goods on important routes and key areas for the World Cup was carried out in order to be able to take targeted action against counterfeiters and piracy products – even when counterfeit goods are exported from China.

And there have been successes: approx. 130,000 allegedly infringing goods have so far been confiscated by Chinese customs, including piracy products that primarily infringe the rights to “Russia 2018” and “ADIDAS“, but also the mosaic graphics on footballs protected by Adidas. In April, for example, Shanghai Customs confiscated 2,000 fake World Cup footballs bearing the “RUSSIA 2018” brand.

Since 1958, a new match ball has been developed for every World Cup, the official World Cup football. Since 1970, Adidas AG has been the exclusive manufacturer and marketer of the World Cup balls. In the 2018 World Cup, the model is called Telstar 18, reminiscent of the very successful Telstar 1970, the ball model of the World Cup in Mexico. New in the Telstar 18 is an integrated NFC chip (NFC = Near Field Communication), which enables interaction with football via a smartphone.

Despite the successes, there is still room for improvement: Brazilian customs sorted out more than 200,000 fake balls in the days leading up to the 2014 World Cup alone. The IPM Connected database of the World Customs Organisation WCO, which also includes China and Russia with their customs administrations, is certainly useful in this context. Customs employees can request information via smartphone whether a suspicious product is counterfeit. How to protect against counterfeiting? The most important is securing of one’s own protective rights. The registration of trademarks, designs and patents should be made for your own country and for all other relevant sales markets as well.

Maybe these articles are also interesting for you: