Louboutin victorious in the battle over the famous red sole

Louboutin won today before the ECJ in the long-standing dispute over his famous high heels and the striking red shoe sole. The ruling is particularly important for trademark protection of combinations of shape and color, which is especially important for well-known brand names.

The ECJ answered the question referred by the Dutch court: Does the term “shape” in the EU Trademark Directive (Directive 2008/95/EC) also include properties which do not concern shape in the sense of three-dimensional structure, but, for example, the positioning of a certain colour in the trademark?

The background is the long-running legal dispute against Europe’s largest shoe retailer Deichmann over the use of red shoe soles. Van Haaren, a subsidiary of Deichmann, marketed a women’s shoe collection in 2012 called “5th Avenue – by Halle Berry”, which included black pumps with red soles. Louboutin was able to force a sales stop (we reported), but the dispute was not over. The Dutch court, before which Louboutin had brought an action against Vant Haaren, asked the ECJ for a precise interpretation of the term “form”.

ECJ sees shape as protection for position of colour 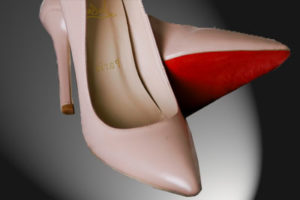 The ECJ clearly affirms this question in the affirmative. “A trade mark consisting of a colour applied to the sole of a shoe is not covered by the prohibition on registration of shapes. Such a mark does not consist “exclusively of the shape” within the meaning of the Trade Mark Directive,” the European Court clarifies.

It does not follow from the usual meaning of the word “shape” that a colour per se may constitute a shape without spatial limitation, the Court held. However, the description of the mark expressly states that the contour of the shoe is not covered by the mark but serves only to show the position of the red colour covered by the registration. Therefore, the mark does not refer to a specific shape of the sole of high-heeled shoes, but the shape is intended to protect the application of a colour to a specific part of that product.

The Court thus confirmed at the same time that the fact that a colour is applied to a product, which thus in practice constitutes a spatial limitation of the colour, does not mean that the shape becomes part of the trade mark.

Furthermore, the Court held that a sign such as that at issue in the main proceedings cannot be regarded as exclusively consisting of the shape if, as in the present case, its principal subject-matter is a colour determined according to an internationally recognised identification code.

The court thus contradicted the opinion of his Advocate General (we reported: “Louboutins: Red sole is a Hallmark – but not a Trademark?! ). EU Advocate General Szpunar pleaded in 2017 and again in February 2018 for inadmissible trademark protection.
In his opinion, it could not be sufficient for trademark protection if colour and shape constitute the essential value of the product. The distinctiveness of colour marks is low, since consumers can hardly make a direct comparison with colour tones. That is even more so in the case of positional marks.

In fact, according to previous case-law, it is not the classification of the mark as a figurative, three-dimensional or positional mark which is relevant, but only the question whether it corresponds to the appearance of the product concerned. For the purposes of that provision, the term shape, which confers essential value on the product, concerns only the inherent value of the shape and does not allow the reputation of the mark to be taken into account.