Joint EPO-EUIPO follow-up study confirms the economic benefits for Europe of patents, trademarks, designs and other forms of IP. We’ll show you the most important facts of this study:

These industries also appear to have shown more resilience in the face of the economic crisis: A comparison of the results of this study (which covers the period 2011-2013) with those of the previous edition (covering 2008-2010) reveals that the contribution of these industries to the EU economy has increased slightly.

EPO President Benoît Battistelli said: “Our second joint report confirms the benefits of patents and other IPRs for the European economy. Intangible assets are increasingly important for innovative companies today, especially for SMEs, but also for research centres and universities.

We again see that this has a positive impact on jobs, growth and prosperity. But in order to remain competitive in the global economy, Europe needs to encourage even further the development and use of new technology and innovations.” 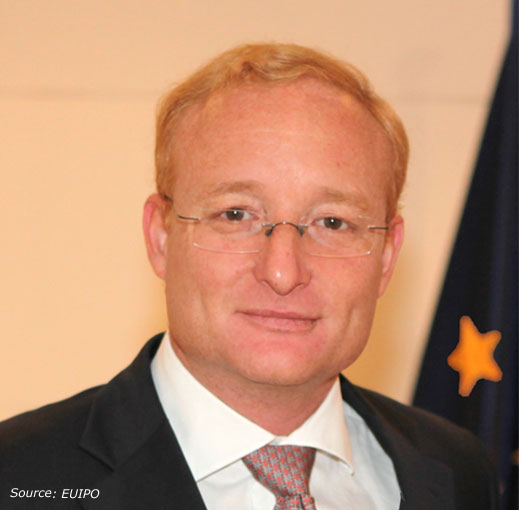 António Campinos, Executive Director of the EUIPO said: “The rapidly changing nature of business in the 21st century means that the EU and global economy relies strongly on Intellectual Property Rights such as trademarks, designs, patents and other rights. The current report shows this reliance is continuing to grow and that these rights are often used inter-dependently.

This poses the challenge of ensuring that IP Rights are more accessible to all businesses, including SMEs, and are protected effectively against infringements, in order to help the EU to retain its innovative strengths and further leverage jobs and growth”. 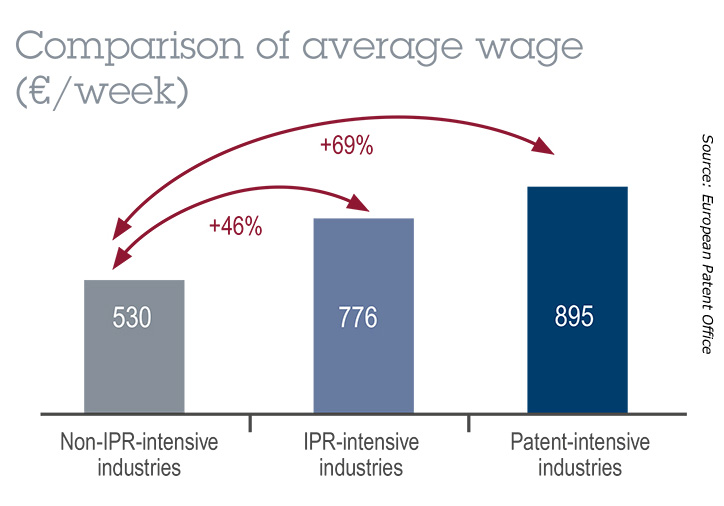 The study covers a broad range of IP rights – patents, trademarks, designs, copyright, geographical indications (GIs) and plant variety rights – identifies the industries that use them relatively intensively, and quantifies the contribution of these IPR-intensive industries to a variety of economic indicators, in particular gross domestic product (GDP), employment, wages and external trade, at EU level. It uses a similar methodology to the previous EPO-EUIPO study published in 2013 and comparable studies conducted in the US.

According to the report, IP-intensive industries account for approximately 90% of the EU’s trade with the rest of the world. The study finds that the EU is particularly strong in Climate Change Mitigation Technologies (CCMTs), with this sector employing 1.2% of the EU workforce, but generating 2.1% of the economic output and significant proportion of the positive balance of trade between the EU and the rest of the world. 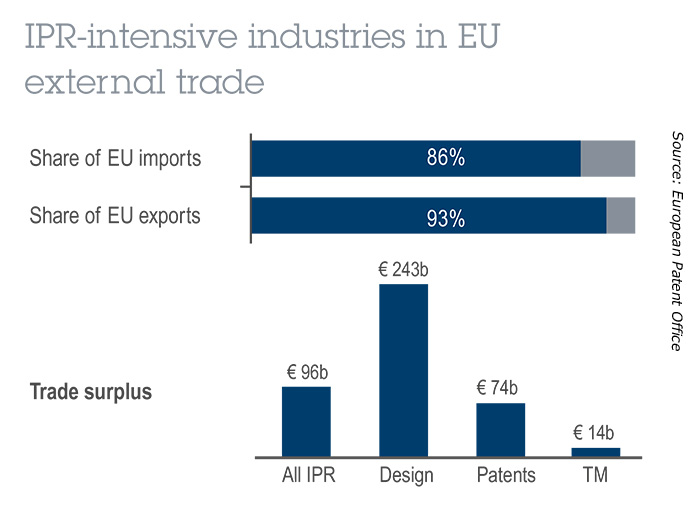 According to the report, about half of all EU industries are IP-intensive, with engineering, real estate, financial and insurance activities, manufacture of motor vehicles, computers and pharmaceuticals among the top 20 IPR-intensive industries in Europe.

Both studies find the same 46% wage premium for workers in IPR-intensive industries.

Protect your Intellectual Property with us

Do you want to protect your trademark, patent or design? Then please do not hesitate to contact one of our attorneys. Request a callback TODAY – it’s free and without any obligations! We would love to hear from you!