Simply.Connected: No distinctive character as trademark in IoT 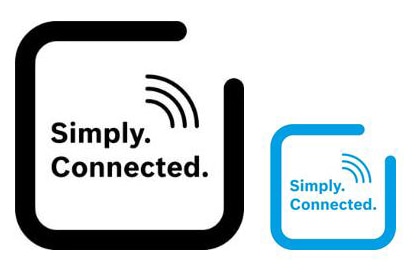 No distinctive character and moreover a slogan

The EUIPO allowed the registration for Classes 7, 11 and 12, but refused it for Classes 9, 36, 37, 38, 41 and partly also 42 on the grounds that the desired Union figurative marks were devoid of distinctive character. This assessment was also shared by the EUIPO Board of Appeal.

The goods and services in respect of which registration was sought in those affected Nice classes, are in particular, sensors; programmable controls; braking and propulsion systems; measuring, control and regulating equipment for motor vehicles and also household and kitchen appliances; and radio and data transmission by satellite, electricity supply equipment, solar cells and solar generators.

In support of its decision, the Board of Appeal held that the word elements of the marks applied for were to be understood as a non-distinctive slogan which meant „just connected“ or „mainly connected“ to a network. Therefore, the figurative signs would be understood as a laudatory indication of an abstract characteristic, since consumers would expect either a normal network connection or a connection of the goods to the Internet of Things (IoT). And this also applies to the goods and services claimed.

Distinctive character of a trade mark

The distinctive character of a trade mark within the meaning of Article 7(1)(b) of Regulation No 207/2009 means that that mark is capable of identifying the product in respect of which registration is sought as originating from a particular undertaking and thus of distinguishing that product from those of other undertakings. The examination of the absolute grounds for refusal and the statement of reasons of the Board of Appeal must cover all the goods or services in respect of which registration of the trade mark is sought. However, flat-rate reasons may be given for homogeneous groups of goods and services.

Bosch argued that the determination of the content of the word elements of the marks applied for was incorrect, particularly since the word elements constitute an unusual combination. The signs in respect of which registration was sought consisted of two sentences, each containing only one word, contrary to the rules governing the use of languages in both German and English. This in itself constitutes a distinctive character.

In addition, the two words are placed above or below one another. The verbal elements of the signs in respect of which registration is sought cannot therefore be perceived as a single statement, but must be perceived as two separate and distinct words, namely “simply” and “connected”, according to Bosch. Moreover, the graphic design is original and easy and immediately memorable for the relevant public. The Board of Appeal therefore erred in its overall assessment of the trade mark applications.

In its judgment, the European Court clarified that it did not share the view of the plaintiff Bosch GmbH. The word element „Simply.Connected“ is dominant in the contested Union figurative marks. In view of the below-average level of attention paid by the public to a slogan, the latter would not notice a figurative element representing a frame. Moreover, the perception of a wireless network connection is additionally underlined, this supports the message of the word element.

The CJEU ruled that the word element is perceived as a uniform statement and therefore confirmed the reasoning of the Board of Appeal. It is well known that an adverb such as „simply“ cannot be used without any linguistic connection, so it is highly unlikely that the word element of the marks will be perceived as two separate words. The Court also pointed out that, according to case-law, the meaning of signs composed of several outwardly separate word elements or of a single word element composed of several words must be presumed to be understood by the consumer where that understanding does not require any particular mental effort. This is the case here.

The Board of Appeal was therefore right to recognise an exalted indication of a quality in the marks, according to CJEU. The figurative signs would give an indication of the suitability of the goods and services claimed to be directly connected to a network or to be incorporated into connected goods. Concerning the development of the Internet of Things, consumers would perceive this as well.

The CJEU therefore held that the marks applied for, taken as a whole, would not be perceived as indications of the commercial origin of the goods and services at issue and, accordingly, would be devoid of any distinctive character, refusing registration of the mark in Nice Classes 9, 36, 37, 38, 41 and, in part, Nice Class 42.