Is a biscuit shape like Oreo distinctive? This question is at the centre of a trademark dispute between Oreo and Oreo Twins that has lasted several years. The case has now been heard before the CJEU: The US owner of the earlier well-known Oreo trademark won.

The trade mark dispute centred on the application for registration in 2015 of an EU trade mark in Class 30: Oreo Twins. The manufacturer of the Oreo Twins and plaintiff in the proceedings before the European Court of Justice (CJEU) is Galletas Gullón, SA (Spain).

Intercontinental Great Brands (USA) filed an opposition against this trademark registration, citing its own well-known earlier trademarks Oreo as a 3D trademark and the Spanish figurative trademark Oreo.

In 2018, the EUIPO rejected the requested trademark registration of the Oreo Twins because of similarity and likelihood of confusion with the earlier and well-known Oreo trademark, also due to the similar biscuit shape Oreo. The applicant Galletas Gullón appealed against that decision.

The applicant relies on decisions of the Spanish courts and the EUIPO and argues that no company can claim an exclusive right to the shape of a round, black biscuit with a white cream filling such as Oreo. Such a biscuit shape is not distinctive. However, it would then follow that the only distinctive element of the earlier mark would be the word element ‘oreo’ as opposed to the word element ‘twins’ of the Oreo Twins mark.

Comparison of the marks as a whole

The CJEU pointed out that in opposition proceedings it cannot be called into question that an earlier European Union trade mark has at least the minimum degree of distinctiveness required for its registration. Moreover, the assessment of the similarity between two marks cannot be limited to taking into consideration only one component of a complex trade mark and comparing it with another mark. On the contrary, the comparison must be made by examining each of the marks in question as a whole. It is only if all the other components of the mark are negligible that the assessment of the similarity can be carried out solely on the basis of the dominant element, the Court added.

Biscuit shape to be taken into account – irrespective of distinctive character 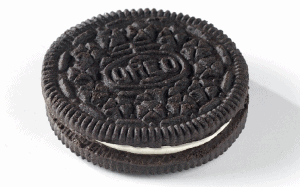 Is a biscuit shape like Oreo distinctive? This question has not been answered by the CJEU and is not relevant to the proceedings before the CJEU. The mark applied for is visibly a complex mark, explained the CJEU, which is composed of several figurative and word elements.

In the present case, the shape of the biscuit cannot be regarded as negligible in the perception of the mark applied for, given its position and size and the elements which highlight it. Nor is that fact diminished or altered by the fact that the shape of the biscuit could be regarded as descriptive or by the absence of distinctive character of that element of the mark. In any event, an absence of distinctiveness of an earlier mark cannot be established in opposition proceedings.

The Court recalled that consumers normally perceive a mark as a whole and do not pay attention to the various details. Since both an Oreo cookie and the Oreo Twins are presented in the same cookie shape, consisting of two round black biscuits separated and at the same time joined by a white filling, the consumer’s attention is not only drawn to the word element ‘Oreo’ but also perceives the cookie shape. Consequently, contrary to the applicant’s submissions, that word element cannot be regarded as the sole or most distinctive element of the earlier mark, nor as the dominant element of that earlier mark.

The Board of Appeal of EUIPO was therefore right to find that there was a slight visual and conceptual similarity between the conflicting marks due to the shape of the biscuit represented in the marks. The CJEU was equally correct in the Board of Appeal’s reference to the importance of visual similarities based on the way the goods were purchased, the more so because the consumer chooses the goods himself.

Furthermore, the Court found that the earlier mark had an exceptional reputation, which also showed that there was a link between the marks at issue.

The CJEU therefore dismissed Gullón’s action in its entirety.

Union trade marks are assessed only in accordance with Union law

Finally, the CJEU also shared its view on the applicant’s reference to decisions of the Spanish courts. The Union’s trade mark system is an autonomous system, its application being independent of any national system, the Court made clear. According to the Court, the conflicting marks must be assessed only on the basis of the relevant Union rules and a national decision, including a decision of the case-law, cannot call into question the legality of the contested decision.

Do you also wish to protect or defend your brand?

Sources for text and images: