Chocolate manufacturer Lindt experiences a setback in court. Lindt tried in vain to protect the gold of the golden easterbunny as a color mark. The famous Lindt golden rabbit is for the time being still not under trademark protection. 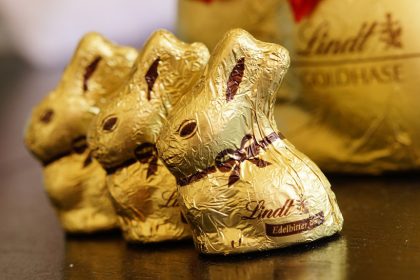 Lindt has been trying for many years to obtain trademark protection for the famous Golden Rabbit. For years, the attempt to obtain comprehensive protection as a 3D trademark was considered a failure before all instances, a process which was taken to the European Court of Justice (ECJ). Rabbits, however, were part of the typical range of shapes of chocolate products, the judges had judged in relation to the 3 D mark sought, especially as an Easter bunny. And the elements of the mark applied for (shape, gold foil and red ribbon with bells) could not give the mark any distinctive character.

Searching for protection as colour trademark

This judgement is already 10 years old, after which Lindt changed the protection strategy. The Swiss chocolate manufacturers were now trying to protect the color gold in the golden rabbit (color shade CIELAB 86.17, 1.56, 41.82) as a colour trademark. The gold colour shown on the packaging foil of the chocolate bunnies is so well known through years of intensive advertising and use that this gold color is generally associated with the Lindt Golden Rabbit / Easterbunny.

In first instance, the Regional Court Munich I had also found this argument conclusive and recognized the gold color of the chocolate bunny as a so-called usage color trademark (33 O 13884/18). This was also supported by a study, which Lindt let create to the admittingness of the gold hare and according to that over 70 per cent of the Germans know the gold rabbit.

But the OLG Munich decided with its only now published judgement of 30 July 2020 (29 U 6389/19) against Lindt and for the process opponent Viba Sweet, which took over the Confiserie Heilemann and also the mark controversy around the gold color in 2016. The OLG admitted that abstract colour trademarks can also be protected as usage trademarks if they have gained recognition in the market.

However, the golden shade in the Lindt golden rabbit has not acquired any reputation for the product chocolate rabbits, the court decided. Something else did not result also from the caught up traffic appraisal. Because Lindt does not generally use the golden color for chocolate bunnies, for which the color is supposed to enjoy protection, but only for a very well-known and successful product, namely the Lindt Golden Rabbit. This Lindt golden rabbit is sold in different sizes and flavors, but always in the same color and shape.

However, to the extent that a trade acceptance of an abstract color mark has been assumed in the case law up to now, these were cases in which the companies have used a certain color as a corporate color for various products of the goods or service sector for which color mark protection was claimed and not only for a specific product, explained the OLG Munich and reminded of the Sparkassen red and Nivea blue.

The court denied the Lindt golden rabbit a traffic reputation therefore. A consumer would not assign according to opinion of the OLG a hare wrapped in gold foil, which looks otherwise completely differently than the Lindt gold hare, straight to the “enterprise Lindt” since he knows their “gold hares”.

The judges of the OLG stressed that they were due to the constant occupation with characteristic and competition disputes in a the position to judge the traffic understanding – and added humorously that they belong likewise to the addressed public, i.e. as potential buyers of chocolate hares.

Whether this was the last word in this case remains to be seen. Because the way to the next instance (BGH) is open to Lindt.

Judgement of OLG Munich (in German)