The Easter Bunny is systemically relevant in New Zealand – the saying “A bunny is and remains a bunny” is also unforgotten in the trademark proceedings concerning the Lindt GOLDHASE as a 3D trademark ten years ago: 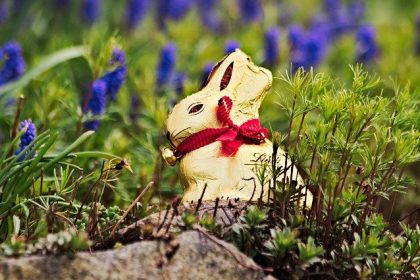 New Zealand’s Prime Minister Jacinda Ardern is making currently humorous headlines in the press when she assured that the Easter Bunny will be in action over Easter despite the Corona crisis. Like the tooth fairy, the Easter Bunny provides an essential service, Ms Ardern is quoted from the New Zealand press conference.

“A rabbit is and will always be a rabbit” – Sprüngli Lindt

But also the procedure for the desired trademark registration of well-known Lindt GOLDHASE as a 3D trademark provided good quotations. The saying “A hare is and remains a hare” is unforgotten in the trademark proceedings concerning the golden rabbit, which was decided against the plaintiffs Sprüngli Lindt before the European Court of Justice 10 years ago.

In 2004 Sprüngli Lindt (Switzerland) had filed an application to register the well-known golden rabbit made of chocolate as a 3D Union trademark, at that time called a three-dimensional Community trademark. The Board of Appeal had refused the requested trademark registration on the grounds of lack of distinctiveness. The Board of Appeal had given reasons for its decision and the elements of the mark applied for (shape, gold foil and red ribbon with bells) were not capable of conferring distinctive character on the mark.

The European Court (CJEU) essentially confirmed this view when this case was heard before the CJEU in December 2010. The CJEU also considered the sitting shape of the Easter bunny and the gold foil to be by no means unusual for chocolate bunnies at Easter time.

The little bell on the red bow was debated in more detail. The Board of Appeal had assumed that there was a direct link between the colour red and the little bell because of their special meaning for Catholics. The applicant Sprüngli Lindt, on the other hand, claimed that it was a sign of origin of an undertaking. There were therefore variations in the similar characteristics of chocolate bunnies of competitors or the manufacturers concerned had concluded an agreement with Sprüngli Lindt.

The CJEU did not find these arguments valid in relation to distinctiveness. It was common ground, the Court stated, that chocolate animals or their packaging were provided with bows, ribbons and bells, so that bells and ribbons were common in chocolate animals, as in an Easter bunny made of chocolate, and could not contribute to distinctive character.

Packaging with the shape of the goods to equate

However, a 3D mark consisting of the appearance of the product itself would only be perceived by the average consumer as a guarantee of origin if the sign differed significantly from the industry, the Court explained in accordance with the case-law, a principle which has been repeated very often since then.

And there is no significant deviation from the industry with the chocolate eastern hare as Lindt’s golden rabbit, the CJEU ruled. Even if it were to be assumed that the gold-coloured foil was a novelty by Sprüngli Lindt for its chocolate bunnies, which had been on the market for 50 years, such marketing could at most be taken into account for the purposes of assessing whether the mark applied for had acquired distinctive character through use, but not for assessing whether the mark was inherently distinctive.

The applicant submits that it has provided evidence of distinctive character acquired through use in Germany, Austria and the United Kingdom. In any event, the golden rabbit is not known outside Germany.

The Court did not follow that approach. In any event, the CJEU held that, in the case of marks which are not word marks, it must be assumed that the assessment of their distinctive character is the same throughout the Union. Moreover, Easter bunnies made of chocolate were already well known throughout the EU in 2004 and the mark should therefore have acquired distinctive character through use throughout the Union in order to be eligible for registration under Article 7(3) of Regulation No 40/94.

The CJEU therefore dismissed Sprüngli Lindt’s action and upheld the refusal to register the Lindt GOLDHASE as a 3D Union trade mark.

Would you also like to protect your trademark or your packaging?

Our lawyers will be pleased to advise you. If you are interested, please contact us – we look forward to your call!