Figurative or position mark? Not relevant!

The ECJ ruled that the decisive factor for the scope of trademark protection is not whether the trademark is a figurative or a position mark, but only the way in which the trademark is perceived. The focus was on a sports shoe with dotted lines. 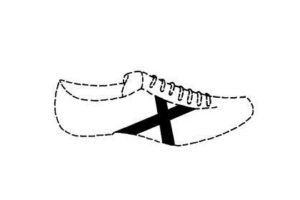 The classification of a trademark as a position mark or as a figurative mark is irrelevant to the scope of trade mark protection or to the assessment of the actual use made of a trade mark,, the European Court of Justice (ECJ) ruled today. Positional marks are close to the categories of figurative marks and three-dimensional marks, since their purpose is to affix figurative or three-dimensional elements to the surface of the product. It follows from the foregoing that, for the purposes of assessing their distinctive character, classification in a category of marks is irrelevant.

Background: Sports shoe with dotted lines in the center

The background to the judgment is an infringement action and a counterclaim with contradictory decisions declaring revocation of the trade mark. The disputed mark is a sports shoe with dashed lines of the intervener, the Munich, SL (Spain). The dispute mark has been registered as a Union trade mark since 2004 and is contested by Deichmann (Germany).

The point at issue was proof of genuine use of the mark during the relevant period. Did the illustrations in the catalogues submitted show different types of sports footwear to which different crossed lines were attached? And was the Board of Appeal entitled to take into account coloured elements even though the trade mark application was filed in black and white?

The applicant Deichmann claimed that the contested mark did not appear on the shoes in the evidence submitted. Since the mark at issue is a figurative mark, the marketing of shoes which look so similar cannot prove use of that mark.

The CFI had rejected this argument in its judgement last year. A trade mark, even if it is to be regarded as a position mark, remains at the same time a figurative mark, the CFI clarified. For the scope of trademark protection, however, it is in any case not decisive whether it is a figurative mark or a position mark, but only the way in which the trademark is perceived, the CFI ruled.

The ECJ confirmed the judgement of the CFI in its ruling today. The graphic representation of a mark must be clear, precise, self-contained, easily accessible, comprehensible, durable and objective, pointed out in its today’s judgment. Two types of graphic design were used in the graphic representation of the mark at issue, namely the interrupted or dotted ‘dashed’ lines representing the appearance of the product covered by that mark and two solid lines representing a fixed cross.

Last year, the CFI held that the “dotted” lines forming the outline of the sports shoe and its laces should be understood as allowing the position of that cross to be determined without the outline of that product being covered by the trade mark.

The ECJ expressly confirms this assessment. It can be inferred directly and with sufficient precision from the graphic representation of the mark at issue that the protection sought comprises only a cross consisting of two black cut lines represented in solid lines.

In addition to the graphic representation, other materials relevant to the proper identification of the essential characteristics of a sign, such as, in this case, dashed lines, may also be taken into account, the Court ruled today.

Although the ECJ acknowledged that, when dotted lines are used to register a trade mark, a description or disclaimer is often added to define the scope of the protection claimed, the fact remains that neither existing law nor case-law requires such statements to be made. An applicant for trade mark protection is free to determine the scope of the protection sought by adding a description of the subject-matter of the registered trade mark.

Deichmann had also asserted that the EUIPO Guidelines require that a position mark is expressly described as such. Deichmann argued that if the broken or dotted lines were not the subject of an express disclaimer of liability, those lines were part of the mark. The ECJ rejected this. The ECJ clarified that the EUIPO directives were not binding legal acts interpreting provisions of EU law and that the law did not require an explicit disclaimer.

Figurative marks can be position marks

The CFI had already pointed out in its judgment that case law recognises the possibility that figurative marks are in reality “positional marks”. A trade mark, even if it is to be regarded as a position mark, remains at the same time a figurative mark, the CFI had clarified. Dashed lines are regularly used in trade mark representations, the court of first instance added, without necessarily indicating in detail all the contours or other characteristics of those goods.

This assessment was also confirmed today by the ECJ. Classification as a figurative or positional mark is irrelevant for the purposes of assessing actual use of such a mark, as in the present case. The CFI rightly held that the requirements for verifying the actual use of a mark are analogous to those relating to the acquisition by a distinctive sign through use for the purpose of its registration.

The ECJ also confirmed the ECJ’s assessment that whether the mark in question was registered as a figurative mark is irrelevant for determining the scope of the application. The decisive factor for the scope of the application for protection is the way in which the trade mark is perceived. The ECJ therefore confirmed the judgment of the ECJ and dismissed Deichmann’s action.

Or do you need support in decision whether a figurative or a position mark would be the best? Our lawyers are experienced in trademark and patent law, national and international law.