Did the competitor’s pictures to German shoe manufacturer Deichmann show different types of sports shoes? At the centre of the proceedings concerning the use of an earlier mark, classification as a figurative or positional mark, was a sports shoe with dotted lines.

Sports shoe with dotted lines in the center 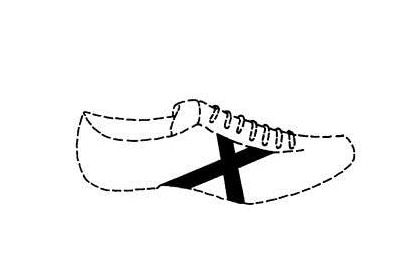 The judgment is based on an infringement action and a counterclaim for registration of a Union trade mark by the intervener, Munich, SL (Spain). The Union trade mark was registered on 24 March 2004 under number 2923852 for Nice Class 25 ‘Sports footwear’. In an infringement action before the Landgericht Düsseldorf (Germany) against the applicant, Deichmann SE (Germany), Deichmann filed a counterclaim on 29 June 2010 and, in January 2011, filed an application for revocation of the mark in question and for a declaration of invalidity of that mark.

The Cancellation Division upheld the revocation of the mark, but the subsequent appeal of the EUIPO Board of Appeal annulled that decision. The point at issue was proof of genuine use of the mark during the relevant period. Did the illustrations in the catalogues submitted show different types of sports footwear to which different crossed lines were attached? And was the Board of Appeal entitled to take into account coloured elements even though the trade mark application was filed in black and white?

The European Court (Court of First Instance (CFI)) therefore had to assess both the validity of the evidence provided on the use of the mark and to decide whether the question “figurative mark or positional mark” is irrelevant for trademark protection. The applicant Deichmann claimed that the contested mark did not appear on the shoes in the evidence produced. Since the mark at issue is a figurative mark, the marketing of shoes which look so similar cannot prove use of that mark.

However, the CFI dismissed the action. The differences between the mark at issue and the variants used by the intervener on sports footwear are negligible. Nor can colour be regarded as one of the essential factors which confer distinctive character on that mark.

It follows from case-law that the condition of ‘genuine use’ of a trade mark within the meaning of Article 15(1) of Regulation No 207/2009 may be satisfied if the trade mark is used only in conjunction with other elements which are adjacent to it or even superimpose it, provided that the trade mark continues to be perceived as an indication of the origin of the product concerned, the CFI held. Account must be taken of the fact that the particular graphic design, in the form of a cross, clearly designates the element for which protection is sought, in solid lines, and dashes the contours of the goods in question on which it is affixed.

The Court also pointed out that case-law recognises the possibility that figurative marks are in reality ‘positional marks’. A trade mark, even if it is to be regarded as a position mark, remains at the same time a figurative mark, the CFI clarified. Dashed lines are regularly used in comparable situations in this way, the Court of First Instance added, that is to say in relation to various goods to which a trade mark is affixed, without necessarily indicating in detail all the contours or other characteristics of those goods. In the present case, the use of dotted lines was clearly intended to facilitate the understanding of the fact that the mark at issue was intended only to protect the cross depicted in solid strokes, in a particular position on sports footwear.

The Board of Appeal was also right to consider that the mark at issue could not be separated from the shape of part of the product for which it was protected (the upper part of a sports shoe). The decisive factor for the scope of protection of a trade mark is the way in which it is perceived solely on the basis of the sign as it is registered, the CFI held.