The ECJ ruled today in a preliminary ruling in the dispute over imitation of the Ferrari design FXX K. Can the partial area of an image be claimed as an unregistered Community design? “Yes”, ruled the ECJ – but only if… 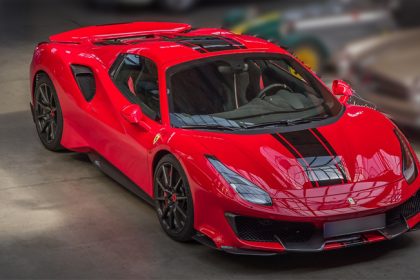 Ferrari (Italy) has been engaged in a dispute for years over the Ferrari design of its top model, the Ferrari FXX K, which was only produced in very limited numbers and is intended exclusively for driving on race tracks. The Ferrari FXX K comes in two variants, which differ only in the colour of the “V” on the front bonnet.

Ferrari considers that Mansory Design infringes one or more unregistered Community designs in its favour consisting of the component part of its FXX K model by marketing these components. The components in question were those of its bodywork. Ferrari therefore brought infringement proceedings in Germany and filed annex applications. In addition, Ferrari asserted claims under unfair imitation law in respect of the components offered for sale in the territory of the Federal Republic of Germany.

Unregistered Community design – from part of the car model?

The Düsseldorf Upper District Court (Oberlandesgericht, OLG) rejected Ferrari’s action or appeal – as had the Düsseldorf Regional Court (LG Düsseldorf) – and ruled that the first and second claimed designs had never existed, as Ferrari had not proved that the minimum requirement of a certain Individual character and unity of form had been fulfilled. Only the third design claimed existed, but that had not been infringed by Mansory Design.

In the meantime, the case is before the Federal Court of Justice (BGH), which has asked the European Court of Justice (ECJ) for a preliminary ruling on the interpretation of Article 11 (1) and (2), first sentence, of Regulation (EC) No. 6/2002 as well as Article 4 (2) (b), Article 6 (1) of this Regulation.
The question was: Can the disclosure of an overall representation of a product give rise to an unregistered Community design in individual parts of the product?

The ECJ answered this question with a clear “yes” – provided that the appearance of that part or component is clearly recognisable and clearly visible in the representation of the disclosure. Novelty and the individual character of a Community design are the same for products and parts thereof, the ECJ clarified.

The term “individual character” within the meaning of Article 6 of Regulation No 6/2002 does not govern the relationship between the design of a product and the designs of the parts of which it is composed, but the relationship between those designs and other, earlier designs. However, in order to be able to examine whether the appearance fulfils individual character within the meaning of Art. 6, a part of a product claimed in this way must be clearly delimited by lines, contours, colours, the shape or a particular surface structure, the court specified.

Consequence of this judgement

Is it now necessary, according to this judgment, to disclose separately each individual part of their products which they wish to see protected by an unregistered Community design? The ECJ reassures; this is by no means necessary to ensure the requirement of recognisability of the subject-matter. But the fact remains with this judgement that an unregistered Community design can only be claimed as part of an entire image if that part can also be precisely and clearly identified. It remains to be seen how this will be interpreted in judicial practice.

Do you need support for your IP right?

Our attorneys have many years of expertise in design and trade mark law as well as in the entire field of intellectual property and are authorised to represent you before any court – in Germany and also internationally.
Please feel free to contact us if you are interested.