Genuine use of the earlier mark: Diesel achieves partial success

Fashion manufacturer Diesel has achieved partial success in the brand dispute over the well-known Diesel mark. Genuine use of the earlier mark was successfully proved for men’s and women’s denim jeans and shoes, but not for bags. In focus: proof by print advertisements and catalogue pages. 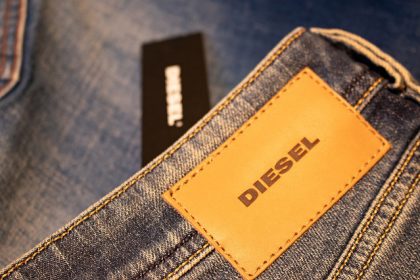 Yesterday’s judgment of the European Court (CJEU) annuls the contested decision of the Board of Appeal and confirms the genuine use of Diesel’s earlier mark in respect of women’s and men’s denim jeans and footwear. The judgment is part of a trademark dispute lasting several years concerning the striking figurative marks of the fashion manufacturers Diesel SpA (Spain) against Sprinter megacentros del deporte, SL (Spain).

Applicant Diesel SpA opposed Sprinter’s trade mark registration for an EU figurative mark representing a curved and angled line – the suggestion of the capital letter D. A quite similar sign has been under Diesel’s trade mark protection since 1999. In addition, since the new similar figurative mark was applied for for the same goods (leather goods and bags in Nice Class 18 and clothing and shoes in Nice Class 25), for which the earlier Diesel mark also claims trademark protection, Diesel claimed likelihood of confusion as its own mark.

The case was already decided once before the European Court (CFI) in 2017, which, contrary to the findings of the Board of Appeal, found visual similarities and found the marks to be phonetically and conceptually identical. With this ruling (T-521/15, not published, EU:T:2017:536) this case was referred back to EUIPO. Indeed, the CFI found that the Board of Appeal had neither carried out a comparison of the goods nor an assessment of the evidence of genuine use submitted and pointed out that it was for the Board of Appeal to assess those issues.

By the contested decision of 3 August 2018 the Board of Appeal dismissed Diesel’s appeal for the genuine use of the earlier mark had not been sufficiently proven. Diesel appealed against that decision.

Conditions for proving genuine use of the mark

Accordingly, in its judgment, the European Court (Court of Justice of the European Union, CJEU) once again set out the requirements and conditions for proving genuine use of the mark.

Genuine use of a trade mark cannot be proved on the basis of probabilities or suppositions, but must be demonstrated by solid and objective evidence of genuine and sufficient use of the trade mark on the market concerned, the CJEU stated. It is not possible to determine a priori and in the abstract what quantitative threshold should be chosen to establish whether the use is genuine or to establish a de minimis rule.

Under Rule 22(3) of Regulation No 2868/95, proof of use must consist of indications concerning the place, time, extent and nature of use of the earlier mark in relation to the goods and services for which it is registered and on which the opposition is based. Although these requirements for proving use of the earlier mark are cumulative, the CJEU explained that this rule does not mean that each piece of evidence must necessarily provide information on all four elements.

Moreover, according to settled case-law, the affixing of the earlier mark to the goods is not necessary to prove genuine use in relation to those goods – provided that a link is established between the mark and the sale of its goods, the CJEU added.

The mere existence of catalogues cannot prove use of the earlier mark, but can nevertheless make it probable and credible. The same applies to affidavits: even if they are not sufficient in themselves as evidence, they can still be supported by other evidence.

The goods in Nice Class 18 were proved by extracts from catalogues, with Diesel’s reference to over 5 000 sales outlets in 80 countries. But that does not prove that those catalogues were distributed to potential customers, nor the extent of any distribution or the number of sales of goods protected by the earlier marks, the Court held. The Court decided that this was not specific enough in relation to the goods sold.

However, in respect of goods in Nice Class 25, Diesel’s action was partially successful. Evidence was provided in the form of advertisements which the applicant had placed during the relevant period in various well-known and widely circulated magazines in the United Kingdom, Italy, Germany, Spain and France. The Board of Appeal considered that the mere submission of published advertisements was not sufficient.

The CJEU saw it differently. The fact that the price of the applicant’s shoes is indicated in some of those magazines confirms that the goods were present on the market, the Court explained.

In addition, for the years 2009 to 2013 net sales figures in the three-digit million range and figures on advertising investments in the two-digit million range were mentioned. And according to the affidavit, the figures for advertising investments refer to the DIESEL trademarks and the “D logo”, and the net sales figures refer to goods on which the “D logo[s]” is visible.

In that regard, the applicant submits that the Board of Appeal wrongly held, in relation to footwear, that proof of genuine use of the earlier mark had not been furnished for footwear in Class 25.

As regards men’s and women’s denim jeans, the Board of Appeal had found that the evidence was insufficient because of the poor quality of the reproductions. Diesel had submitted photographs showing mainly jeans for men and jeans for women, and in particular images of denim jeans for men and women from advertisements in magazines. However, most of the illustrations did not clearly show the Diesel sign. Only one print in the magazine Cosmopolitan in the UK showed a legible sign capable of designating the earlier Diesel mark. Since those magazines are very well known and, consequently, their distribution must be regarded as a well-known fact, Diesel thus proved genuine use of the Diesel mark for jeans for men and women in Nice Class 25, the court decided.

However, the Court rejected Diesel’s other plea in law, in which the applicant strongly objected to the fact that the proof referred only to the sub-category of men’s and women’s denim jeans in Class 25 and not to the broader categories of clothing or even trousers in that class. Proof of genuine use of the trade mark would only grant protection to the sub-category or sub-categories to which the goods or services for which the trade mark was actually used belong, the CJEU ruled.

Yesterday’s judgment of the European Court (CJEU) therefore annuls the contested decision of the Board of Appeal for men’s and women’s denim jeans and shoes in Nice Class 25.