Luxury brand Gucci has lost two trademark appeals at the European General Court, in the latest round of the Gucci vs. Guess battle that started back in 2012. In two decisions made on October 11 (first, second), the General Court dismissed both appeals from Gucci.

Last week the EU General Court (Third Chamber) ruled against Gucci in two trademark matters. The first claim concerned Guess’s current European trademark registration for its four interlocking capital letter ‘G’ stylised logo, with the second claim concerning the label’s pending application for an international trademark for its interlocking logo. The Italian luxury brand Gucci argued that Guess’s logo infringed on its international and European Trade trademarks for its own interlocking ‘G’ logo. In addition Gucci argues that Guess ‘G’ logo was too similar to its previous ‘G’ logo.

In July 2014, the Cancellation Division at the European Union Intellectual Property Office (EUIPO) rejected Gucci’s application for a declaration of invalidity. One month later Gucci filed a notice of appeal. The appeal was dismissed in May 2015 by the Fourth Board of Appeal of the EUIPO, which found that the “signs at issue gave a completely different overall impression, with the result that they could not be regarded as similar”.

Gucci appealed claiming that the signs are highly similar, inasmuch as each of them consists of a combination of capital ‘G’ letters, with the result that they will convey the same overall impression to the relevant public, the attention of which will be attracted more by the element ‘g’, which they have in common, than by their minor differences. Furthermore, the earlier marks have an exceptionally high level of distinctiveness and an indisputable reputation. In addition, the likelihood of confusion is further increased by the fact that the opposition was based on the earlier marks’ membership of a family of marks, which all consist of a combination of capital ‘G’ letters.

No likelihood of confusion

The General Court dismissed the appeal: “Contrary to the applicant’s arguments, the relevant public, which will not break down the contested mark into its various elements, but will retain the image of the sign as a whole, will not perceive in that mark the capital letter ‘G’, but rather an abstract ornamental motif.”

The Court further held that Guess’s logo “could be perceived both as reproducing stylized letters, such as the capital letter ‘X or the letter ‘e’, and as a combination of figures and letters, such as the figure ‘3’ and the letter ‘e.’“ Gucci’s marks clearly consist of “the capital letter ‘G’ positioned in a normal way and that that on the right, which was inverted, mirrored it.” 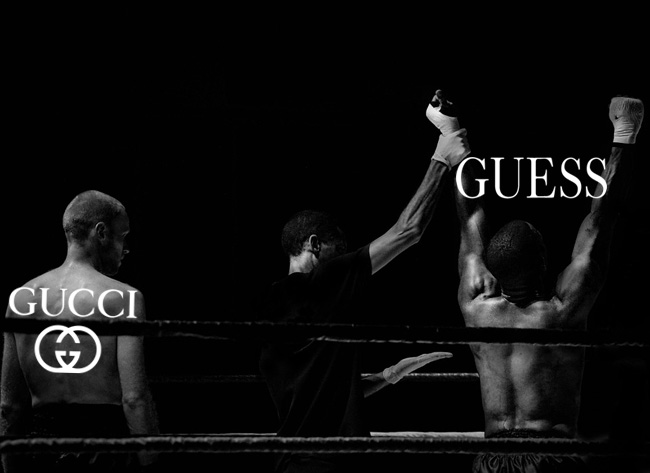 Since Gucci, the party that initiated the proceedings, was unsuccessful, the court has ordered it pay the relevant costs associated with the case, including the costs incurred by Guess before the Board of Appeal of the European Union Intellectual Property Office.

Do you need help in protecting your trademark?

Beside your mark, is there another trademark that could confuse similarity with yours? Speak to us so that we can examine your case and do the necessary legal steps to protect your trademark!

Request a free call-back without and obligations now: