ECJ: Outer coloured motif does not have to deviate from the norm

Colour marks and patterns are business as usual in trademark applications. But what is the situation for a coloured motif that is applied externally like on a bus? This case of the ECJ is all the more interesting because the trademark was applied for is for a service. 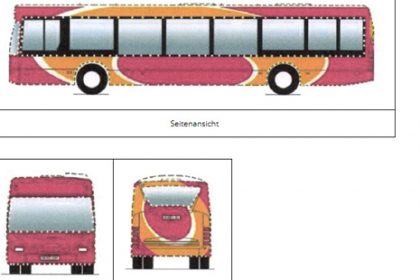 The case was brought as a question referred from Sweden, where a bus company wished to have its coloured motif protected as a trade mark, for “transport and conveyance” services in Nice Class 39. This was refused by the Swedish Trade Mark Office on the ground of lack of distinctive character.

In the ensuing appeal proceedings before the Swedish Patent and Trademark Court (Patent- och marknadsdomstol), the bus company claimed that it was a positional mark and, as such, it was affixed in a certain position and size on the buses and trains used for the provision of the services.

However, the Court of First Instance dismissed the action. Since distinctive character must be assessed in the context of an overall assessment, and since coloured decorative motifs are often used on commercial means of transport, consumers consider the signs to be decorative but not an indication of commercial origin, the Court stated reasons for its dismissal.

Question referred by the Swedish Court of Appeal

The appellant appealed against that judgment to the Svea hovrätt, Patent- och marknadsöverdomstolen (Court of Appeal, Patent and Market Court, Stockholm, Sweden). In that context, the Swedish Court of Appeal referred the following question to the European Court of Justice (ECJ), which ruled yesterday:

In order to assess the distinctiveness of signs which are intended to be affixed to certain parts of a transport undertaking’s vehicles in order to distinguish the latter from others, must those signs depart significantly from the norm or customs of the sector?

Assessment criterion: deviation from the standard

The background to this is that, according to settled case-law, the criterion of a significant departure from the norm or customs of the sector must be applied to cases where the sign consists in the appearance of the product itself for which registration of the mark is sought. Average consumers are not in the habit of making assumptions about the origin of products on the basis of their shape or the shape of their packaging in the absence of any graphic or word element.

In its judgment, the ECJ itself referred to its own 2014 Apple Flagshipstore case law, according to which this applies and a significant departure from the norm must be shown where the sign consists of the representation of the configuration of the spatial surroundings in which the services for which the mark is sought are provided.

However, such a situation does not exist in the present case around the coloured motif of the bus undertaking. If the sign consists of graphic elements which are to be applied to the goods used for the provision of the services covered by the application, the ECJ specified.

The signs applied for as trade marks cannot be confused with the shape or packaging of those goods, the ECJ ruled, nor are they intended to represent the geographical environment in which the services covered by the application for registration are provided – despite their representation as dotted lines.

The signs consist of colour compositions which are systematically assembled and spatially delimited. The Court emphasised that the applications for registration of the mark thus concern very specific graphic elements. That is an essential element of a trade mark application, which requires clarity and intelligibility as regards the right to protection.

However, such a situation does not arise where, as in the present case, the signs at issue consist of graphic elements which are intended to be applied to the goods used in order to provide the services covered by the trade mark application.

Coloured motif does not represent the spatial surroundings of the service

The Court summarised: The signs applied for as trade marks cannot be confused with the shape or packaging of those goods, nor are they intended to represent the spatial environment in which the services covered by the application for registration are provided, despite their representation as dotted lines.

Consequently, when assessing the distinctive character of a trademark such as the present one – a sign composed of coloured motifs which is intended to be applied to goods intended for the provision of a service in order to be registered as a trademark for that service – it is not necessary to examine whether the signs applied for as trade marks depart significantly from the norm or customs of the sector, the Court of Justice has held.

Is trademark protection also an issue for you?