The form of a shoe sole of the Converse manufacturer All Star CV was declared invalid as a 3D trademark for shoes and components thereof, the CJEU ruled. The European court recognized screenshots of the online shop Zalando as evidence of known facts – the disputed sole was not presented to the consumer there from the beginning. 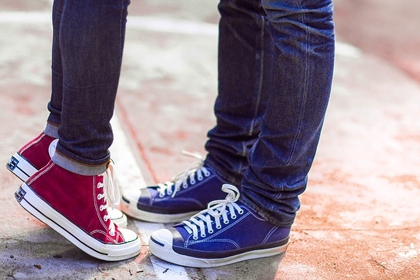 The EUIPO rejected the declaration of invalidity for Classes 17 and 35 but declared the mark invalid for Nice Class 25. The subsequent Board of Appeal of the EUIPO confirmed the invalidity of the contested mark for goods in Class 25. The Board of Appeal took the view that the evidence submitted by the applicant had not shown that the shape of the sole in question had been used by the applicant as an indicator of origin. The shape of the disputed sole is a simple variant of the features common to other sole shapes. According tot he Board of Appeal examples of soles with simple raised patterns for footwear, in particular for sports and leisure footwear, are common and fulfil a technical function.

Action of Converse against the basis of known facts

The applicant All Star CV contested that decision on the ground that the Board of Appeal infringed the provisions of Article 76 of Regulation No 207/2009 in so far as it based its decision on known facts. In particular, the evidence submitted by All Star CV was not given sufficient weight since it was not classified as an expert report within the meaning of Article 78 of Regulation No 207/2009. In addition, the applicant relied on a presumption of validity of its trade mark.

In its judgment (EU:T:2019:210), the CJEU conceded this presumption of validity to the plaintiff: the European Union trademark is considered valid until it is declared invalid by the EUIPO after invalidity proceedings. This was the logical consequence of the control carried out by EUIPO in the context of the examination of a registration application.

This presumption of validity, however, restricts the obligation of the EUIPO to examine the relevant facts ex officio, as laid down in Article 76(1) of Regulation No 207/2009. In order to examine the relevant facts, EUIPO had to take into account not only the evidence submitted by the applicant for a declaration of invalidity but also the known facts established by EUIPO during the invalidity proceedings.

Screenshots of the online shop Zalando are regarded as known facts

In concrete terms, the CJEU confirmed the evidence of the known facts on the basis of which the Board of Appeal had decided. These are screenshots of the website of the online shop Zalando. Since the sole was not presented to the consumer from the outset, the Board of Appeal rejected the disputed mark as an indicator of the origin of the goods concerned. The CJEU recalled that facts which are probably known to a person or which are known from generally accessible sources are so-called infamous facts. The only relevant criterion for the assessment of the evidence submitted is its credibility. Specifically, Internet sites must be classified as generally accessible sources and therefore known facts within the meaning of the case-law, unless the information in question is classified as highly technical. This is the case with the disputed 3D trademark of a sole.

In its judgment, the Court pointed out that the Board of Appeal’s core statement – that the shape of the sole at issue is a simple variant of the usual features of other sole shapes – is a conclusion which can be drawn from practice without other evidence to the contrary. Nor was the Board of Appeal obliged to seek the views of the parties to the previous proceedings. Although the Board of Appeal invites the parties, as often as necessary during the examination of the appeal, to submit their observations, within a period to be fixed by the Board of Appeal, on the communications which it sends or on those of the other parties, evidence of its own motion, such as the screenshots of the Zalandoshop, constitutes a known fact and is therefore deemed to be known to each person.

Therefore, the CJEU dismissed the action of Converse manufacturer All Star CV and confirmed the invalidity of the 3-D shape in the form of a shoe sole for the Nice class 25.

Registration of a shoe sole already rejected by the CFI

The CJEU also pointed out a general problem for the registration of 3D trademarks. Consumers are not accustomed to assuming the origin of goods on the basis of their shape or packaging where there are no graphic or textual elements. It may therefore be more difficult to acquire distinctive character in the case of such a three-dimensional mark than in the case of a word or figurative mark.

This has already been decided by the highest European Court of Justice (ECJ). A 3-D pattern of crossing wavy lines cannot be protected as a figurative mark, the ECJ ruled in September 2018 – we reported. The design of a shoe sole should also be protected in that case as a 3D trademark and was also refused.