Today the Court of Justice of the European Union (CJEU) ruled on the case Le Sac versus Le Sac, which concerns the likelihood of confusion between the younger Armani trademark ‘Le Sac’ and the earlier Spanish national trademark ‘Le Sac’. A word element containing a famous brand name such as Armani does not become the dominant element despite its fame.

Armani applied for a Union figurative mark which shows three elements: the stylised verbal element ‘le sac’, above it in a smaller verbal element ‘giorgio armani’ and below it the number 11, written in even smaller characters.

The Opposition Division upheld the opposition. Armani appealed against the decision to the Board of Appeal of EUIPO, which dismissed the appeal by decision of 13 August 2018 (‘the contested decision’). The decision was based on the fact that, although the marks at issue were not conceptually similar, they were visually and phonetically similar on average. There is a likelihood of confusion between the marks at issue.

In today’s judgment, the European Court (CJEU) confirmed this decision and ruled on the likelihood of confusion pursuant to Article 8(1)(b) of Regulation 2017/1001. 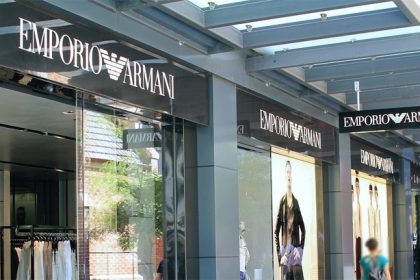 The Court stated that there is an average degree of visual and phonetic similarity between the signs at issue, since the element ‘le sac’ is partially identical in the marks at issue. According to the appellant, in the overall impression created by the mark applied for, the word element ‘le sac’, on account of its size, stylisation and central position, and the word element ‘giorgio armani’, on account of its size, are the most important elements.

The Court emphasised that the visual and phonetic similarity was of sole relevance in the present case, since the conceptual comparison was irrelevant in this case, since the signs were not conceptually similar because of their meaninglessness (since the French word ‘sac’ is translated into Spanish by the word ‘bolsa’).

Armani had argued that the word element ‘giorgio armani’ was the most distinctive and therefore dominant element of the mark applied for because of its fame. Indeed, the CJEU confirmed that if an element is itself a well-known mark in a composite mark, it may play a more important role in a composite mark. However, it does not follow from this that the comparison between the signs at issue can be limited to taking into account only that element as compared with the earlier marks, the element ‘le sac’ is also visually important for the overall impression and has average distinctiveness.

Similarity of goods and services

According to settled case-law, in assessing the similarity of the goods or services in question, all the relevant factors relating to those goods or services should be taken into account. Those factors include, inter alia, their nature, their end users and their method of use and whether they are in competition with each other or are complementary, and also their distribution channels.

There is a low to average degree of similarity between the goods and services in question, the CJEU stated.

The distinctive character of a contested mark is taken into account only after the assessment of similarity. In the present case, the CJEU assessed that the contested Armani mark Le Sac has an average degree of distinctiveness. In the clothing sector, it is not an unusual practice to design a mark differently, the Court explained.

Therefore, the CJEU held that the Board of Appeal had not made an error in its assessment and confirmed a likelihood of confusion caused by the contested Armani mark Le Sac.

Would you also like to protect or defend your brand?