Apple was victorious before the Court of Justice of the European Union in the trademark dispute over the famous apple. The focus was on the exploitation of the well-known earlier trademark through a stylized logo, but the similarities between word marks and figurative marks were also addressed.

With its ruling in the Apple versus Apo case (EU:T:2018:536), the Court of Justice of the European Union (CJEU) followed the recent trend to strengthen the rights of brand mark owners.  It was not until 2012 that the defendant Apo International Co. Ltd. based in Taipei (Taiwan) registered a figurative trademark with a stylized fruit picture with the European Patent and Trademark Office (EUIPO). Apple, on the other hand, filed an opposition with reference to its own figurative mark and also to two word marks APPLE.

However, both the Opposition Board and the Board of Appeal of the EUIPO rejected the opposition. The key argument in the statement of grounds was that there was no great similarity between the disputed mark and the earlier marks of the famous Apple mark, since it was not possible to clearly identify an apple from the figurative element of the contested mark.

Similarity assessed by the CJEU

The CJEU therefore took a very close look at the distinctive character of the marks, particularly as it was undisputed that the Apo had applied for their mark in the identical Nice classes and in the identical goods and services for which the Apple marks were registered.

Is the stylized fruit clearly an apple? 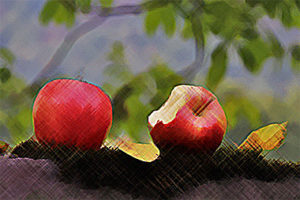 Even if some consumers were to perceive the disputed figurative element as a fruit other than an apple, another part might well regard the figurative element as a stylised representation of an apple, the CJEU held in its judgment. While it is true that the perception of the goods in question by the average consumer must be taken into account, that does not preclude the possibility that, where signs permit several interpretations, the perception of those signs may not be identical for all consumers. In addition, since the contested figurative element of Apo Ltd. has an incision in the middle of the underside, consumers would associate an apple with it and not an orange, mandarin or peach, all of which are round and without an incision.

The CJEU held that the contested and the earlier Apple marks are similar. Despite their different stylisation, the marks in question still have in common the fundamental characteristic that they represent an apple. In addition, it should be pointed out that, in the overall impression of the mark applied for, the figurative element is not negligible but constitutes a distinctive feature which contributes to the image of that mark.

In general, a possible visual similarity between a figurative mark and a word mark may be found, since the two types of mark have a graphic shape which is capable of creating a visual impression. In the present case, the Board of Appeal found that the mark applied for was clearly different from the earlier word marks because of its graphic characteristics and the fact that the word element ‘apo’ was shorter than the word ‘apple’. Apple argued that the first two letters ‘ap’ were identical and that they were the accentuated syllables in the English-speaking world.

The CJEU stressed that the protection conferred by the registration of the word mark APPLE relates to the indicated word and not to the particular graphic or stylistic aspects which that mark might assume. It follows that a dissimilarity between the signs in question cannot be inferred from the use of capital letters by the earlier word marks. However, since the figurative element of the mark applied for is not only a negligible decorative element, but is also distinctive and contributes to determining the image of the mark applied for, there is certainly a similarity between the figurative mark at issue and Apple‘s earlier word mark.

According to case-law, conceptual similarity arises from the fact that two marks use images with analogous semantic content, in the sense that those images convey the same idea or concept (judgment of 8 November 2017, Oakley v EUIPO – Xuebo Ye (Representation of a discontinuous ellipse), T-754/16, not published, EU:T:2017:786). Such a conceptual similarity is obvious in this case Apple versus Apo.

Finally, the EU Court of Justice overturned the decision of the Intellectual Property Office of the European Union (EUIPO) and confirmed Apple’s opposition to the Apo figurative mark applied for. As in several recent judgments, this strengthens the rights of the well-known trademark owner.