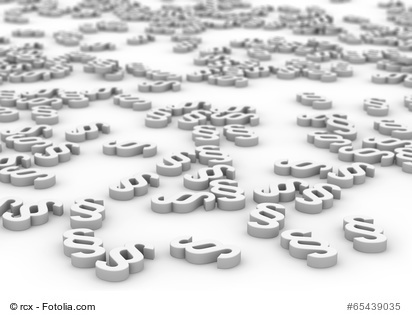 Anybody who received a warning letter due to the infringement of a European patent is threatened by serious consequences. In the worst case it may even happen that you get imprisoned. Indeed this is the last means which is used against patent infringers. And if you react to previous claims in an adequate manner and with the help of professionals, worse consequences may be prevented. We portray five claims which right holders may enforce against patent infringers according to patent law.

The patent holder has an injunctive relief against infringers of his patent. This means that he is entitled to claim that infringers desist the illegitimate action (the action of infringing the patent of the right holder). The injunctive relief is first asserted extrajudicially, for instance with a reprimand or a warning letter:

If the patent infringer doesn?t agree to the attempt of the right holder to enforce the injunctive relief extrajudicially, legal enforcement might follow. The right holder would then claim his due at the court, for example via injunction. We recommend you not to play it by ear.

Compensation claims are about concrete cash values: the patent owner is eligible for the replacement of the damage which has arisen out of the illegal appropriation of the invention. The patent infringer must also pay the lost sales, license fees and so on. The compensation claim can also be asserted extrajudicially and legally:

In fact, the compensation claim seems to be a self-evident matter: Of course inventors respectively the holders of patents have to be eligible for the compensation of the originated damage if someone has faked the product or the object of a patent and thus tried to make money out of other persons? ideas.

Practically things aren?t often that easy: Compensation claims are asserted for every kind of things, probably for things for which patent infringers shouldn?t be made responsible for. To estimate the situation more detailed and to keep costs and further legal consequences as harmless as possible, professional help of an attorney is inalienable. Better engage a lawyer too early than too late before the situation becomes messier and you can?t help yourself anymore at all.

3. Claim for Destruction of Patent Infringing Products and Devices

Patent holders are eligible for the destruction of goods or devices which infringe the object of their patent or use it illegally. The destruction claim may find expression in extrajudicial resolutions as well as later in judicial procedures.

An example for the practice of the destruction claim would be the procedure of the so called customs seizure: patent holders can request that customs intercept potential patent infringing goods before they?ll be imported into the EU with the aim to sell them or present them on tradeshows (with a commercial intention). A part of the procedure is the application for destruction of the goods: If the owner of the goods doesn?t contradict explicitly within a certain term, the goods will be destructed. If he contradicts the destruction, there will definitely follow a procedure in court.

4. Claim for Submission and Inspection

The patent holder is eligible to examine all documents, certificates and so on which might be useful for the justification of his further claims (injunctive relief and compensation claim). That means potential infringers can?t secure or rescue themselves by just holding back or revealing certain documents. Disguising things or letting documents disappear isn?t advisable anyway as it normally exacerbates the initial situation and additionally can be punished separately.

The claim for submission and inspection not only extends to documents but also to things. That means if the patent holder finds it necessary for instance to check in a certain factory whether there is a device which infringes his patent, he actually is allowed to do this.

An attorney can for example help to evaluate the question which documents really need to be seen as important to back up the injunctive relief and the compensation claim. Maybe the patent holder expects much more from the patent infringer than he really has to expose?

5. Claim for Publication of the Judgement

Another claim which also shouldn?t be neglected is the claim for publication of the judgement after a judicial procedure. The winner of the legally arranged patent litigation is allowed to publish the judgement in the press, in the internet and so on if he can state a justified interest: For instance if the company of the patent holder came under pressure for failing to offer an explanation because a lot of customers complained about debased functions of the (faked) product and it will probably suffer losses in sales.

The defeated party (in this case the patent infringer) has to pay the costs for the publication of the judgement.

Claims against the Patent Infringer ? A good Thing, but Often Haphazardly Interpreted

First and foremost the stated claims ensure important rights of inventors. It?s good that they are legally grounded as they are absolutely an indispensable part of the protection of intellectual property.

But in reality it is sometimes the case that those claims are interpreted very haphazardly in order to make as much money as possible out of patent litigations. In any case patent infringers are well-advised to engage an attorney who takes a look at the matter and judges which claims definitely need to be observed and where it possibly can be negotiated in favour of the patent infringer.