The documents filed with the EPO generally may be corrected upon request, even if payment of the appeal fee has not been executed due to incorrect indication or an omission. However, this is subject to the condition that the payment was genuinely intended and was immediately apparent. 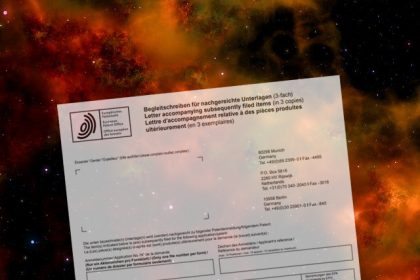 In a somewhat curious case, which is not uncommon, an appellant had arranged for payment of the appeal fee to the EPO within the time limit. However, the actual payment was not made on the day of receipt of the electronic debit order, as no method was indicated in the “Payment method” field.

Therefore, the EPO received the money for filing the notice of appeal only after the expiry of the payment deadline by means of a separate payment accompanied by a request for correction in accordance with R. 139 of the submitted electronic direct debit order, which now also indicated a method of payment.

The Board of Appeal of the European Patent Office (EPO) therefore had to decide whether the payment was made too late or whether Rule 139 EPC on the justification of errors also applies to the payment of an appeal fee. This is because in its decision G 1/12 of 2014 the Enlarged Board of Appeal had already confirmed that a correction of errors under Rule 139, first sentence, EPC in documents filed with the EPO generally applies – upon request.

The Enlarged Board of Appeal specified the following requirements for a correction of documents under Rule 139, first sentence, EPC:

In the present case, the Board of Appeal held that the appellant had satisfied those requirements. The appellant had merely omitted the field “method of payment” on the date on which the payment was made in due time, but had more than sufficient funds in his account to cover the amount required. The correct fee code had also been entered. In addition, the appellant filed the request for correction under Rule 139 EPC only 9 days after the Examining Division’s communication stating that the appeal fee had not been paid. This was acknowledged as a request for correction filed “without delay”.

Finally, the Board of Appeal also considered that the requirement of legal certainty, according to which the parties are normally bound by their procedural acts, had to be weighed against the need for legal certainty. For this, the interests of third parties and the public must be taken into account.

However, the requirement of legal certainty was not relevant in the present case, the Board of Appeal decided, since there was no defendant who could have been affected by a correction. Nor was there any public interest in the payment of the appeal fee.

Restitutio in integrum under Article 122 EPC

As an auxiliary measure, the appellant had requested restitutio in integrum under Article 122 EPC and paid the corresponding fee. Nevertheless, the Board of Appeal did not see any danger that an indefinite and unclear legal status of the contested application would not be subject to a statutory time limit due to the request for correction under Rule 139 EPC.

Since the appellant actually intended to pay the appeal fee within the two-month period under Article 108.1, EPC, the appeal proceedings were initiated in due time, the Board of Appeal ruled. The request for correction referred to an error committed within this period.
Moreover, the appellant did not request restitutio in integrum at a defined procedural stage, but only the correction of an isolated procedural measure, the Board of Appeal explained, namely the incorrect completion of the form for payment of the appeal fee.

An admissible correction otherwise has retroactive effect, while the correction under Rule 139 EPC takes effect ex tunc. If there are sufficient funds in the account on the day the payment order is received by the EPO – as in the present case – that day is deemed to be the date of payment, the Board of Appeal stated. This also applies if this payment order was incorrect but was corrected immediately. The appellant therefore paid the appeal fee within the time limit, the Board of Appeal ruled.

Would you like to protect or defend your patent internationally?