The annual report of the IPO , Facts and Figures, was published lately. They show the development of all registered rights throughout the last two years (2014 and 2015) partly in comparison to the past. Read our short overview to get to know the most important information.

Summary of All Registered Rights

In general the patent applications and publications decreased a little bit from 2014 to 2015 while the trademark applications and registrations increased even more. More people applied or registered a design in 2015 than the year before.

The following summary only refers to applications for UK patents.

As estimated the most applications filed, published as well as granted as patent were from the UK itself in both years (2014 and 2015). Followed with an apparent distance by the USA, Japan and Germany.

The most published applications were classified in the classes of instruments (C21 – C30) in 2014 and 2015 but most patents were granted for electricity. The least frequented class was Combinatorial Technology with less than four applications as well as granted patents per year.

This table shows the top 10 companies who have had the most Patens Granted in any particular year.

Figures do not include European patents designating UK. 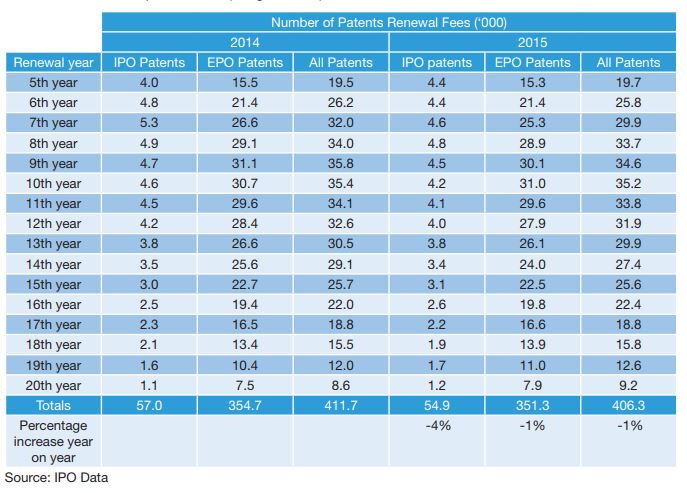 To maintain a granted patent’s rights it must be renewed every year by paying a fee the year ahead starting from the 4th anniversary of the filing date on the patent. These fees increase every year.

Furthermore it is important to mention that the renewal decreases after sevento ten years. The differences between 2014 and 2015 are pretty small (1% less renewed patents in 2015).

The following summary is about national UK and international applications and registrations designating the UK.

Meanwhile the applications and registrations for classes are increasing as well, up to more than 104.000 registered classes in 2015.

Classification of Trade Marks for Goods and Services Published and Registered

This table shows the top 10 companies who have had the most trade marks registered in 2014 and 2015.

The most applications for designs in the UK were filed for the class “Clothing haberdashery” followed by “Furnishing” and “Games,/toys/sports goods”. In total there have been 6.457 applications filed in classes.

Same as for patent and trade mark, the most applicants for a design at the IPO came from the United Kingdom. Next there comes China followed by the United States. The applications filed increased 27% from 2014 to 2015.

Number of designs filed and registered during 2014 and 2015. 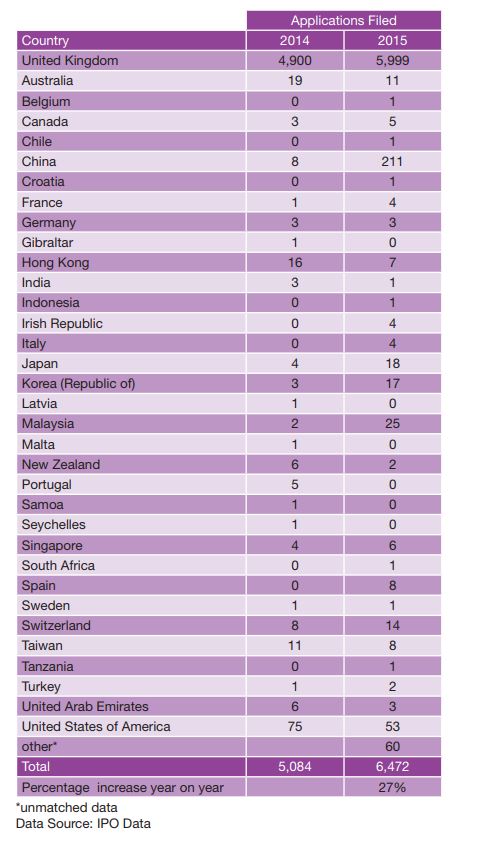