The city of Phoenix has sent a cease-and-desist letter to the Donald Trump campaign demanding the campaign and its cohorts to remove an ad that has begun airing in which Trump featured Phoenix police officers – without their consent. Read more about the case in our blog-article.

Donald Trump’s presidential campaign has not yet responded to a cease-and-desist letter from the city of Phoenix regarding the unauthorized use of city police officers in an ad that began airing at the end of September. Phoenix city attorney Brad Holm sent a cease-and-desist letter to Donald Trump’s campaign, insisting the Republican presidential candidate must pull a 30-second television ad because it shows him shaking hands with a group of the city’s on-duty police officers.

The officers didn’t give consent to the use of their on-duty images in a campaign advertisement for Trump or any other candidate. The issue extends beyond the officers, he said, because the Arizona capital has copyright over their uniforms, badges, insignia and all other imagery of official city materials and on-duty employees, Holm wrote in last week’s letter.

The ad in question, titled “Movement“, includes a short clip showing Phoenix police officers surrounding Trump. The Republican presidential nominee is seen shaking hands with one of the officers in the video. The ad began airing on September 20.

Phoenix does not support or endorse Donald Trump’s campaign 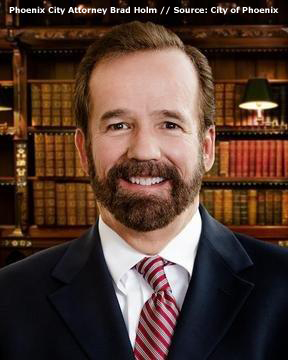 “The officers depicted in the ad were in uniform precisely because they were on duty performing work for Phoenix at the time. In this context, the ad unmistakably and wrongfully suggests that Phoenix and the officers support or endorse Mr. Trump’s campaign. That is not the case. Neither Phoenix nor the Police Department support or endorse any candidate for President of the United States or any other political office.

Phoenix has not consented to the Trump campaign’s use of Phoenix’s legally protected intellectual property. The Police Department’s uniforms—specifically the badge and insignia patches—belong to Phoenix and constitute protected intellectual property of the City. Phoenix owns the exclusive right to use these distinctive designs under federal and state law, including the U.S. Copyright Act. Phoenix strictly regulates the use of its intellectual property. And Phoenix does not allow any person, entity, or political campaign to appropriate or otherwise use its protected materials or replicas for any private purpose such as a campaign ad.”

Protection against illegal use of your IP

Is somebody infringing your intellectual property without your permission? Act now! We can help you and guide you through all the steps (including Cease-and-Desist letters).

Request a free callback from one of our experts now: