In June the United States Patent and Trademark Office granted the 10,000,000th US patent . This brings the Americans a new milestone in their 228-year history of intellectual property. However, the pace of issuing new US patents has slowed in recent years.

On June 19, 2018, the USPTO officially granted Patent No. 10,000,000. The patent, entitled “Coherent ladar using intra-pixel quadrature detection“, issued to Joseph Marron, represents a new milestone in the history of intellectual property. The prominent patent describes a laser technique which can be applicated in the fields of autonomous driving, medical devices , military equipment or space and submarine exploration.

Patent protection anchored in the US Constitution

The origin of patent protection in the US go back a long time and was already anchored in 1787 in the Constitution of the United States of America. It says in Section 8 of Article 1: [infobox color=”#e8edff” textcolor=”#000000″]“The Congress shall have Power…..To promote the Progress of Science and useful Arts, by securing for limited Times to Authors and Inventors the exclusive Right to their respective Writings and Discoveries”[/infobox] 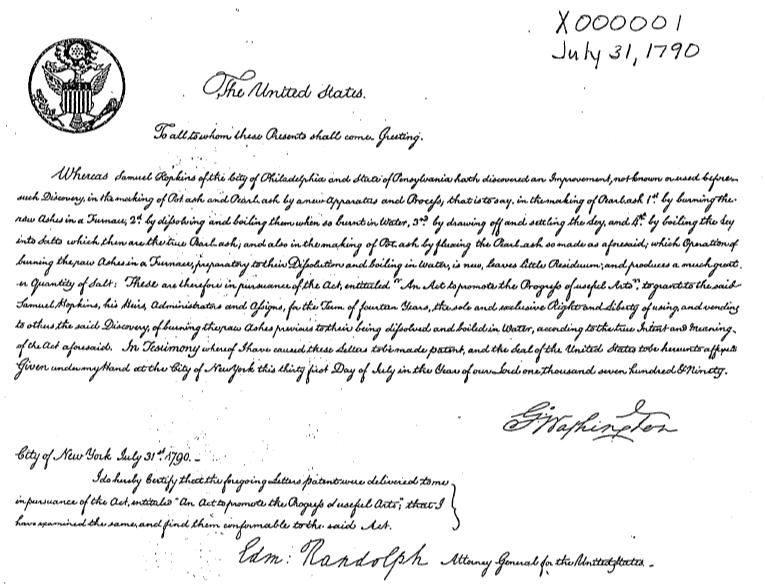 The first US Patent was obtained by the inventor Samuel Hopkins on July 31, 1790 for an improvement “in the making of Pot ash and Pearl ash by a new Apparatus and Process”.

But until the patent with the No. 1 was awarded, it took 46 more years to the July 13, 1836. Because on July 4, 1836, the Patent Act abolished the old patent registration system and introduced a new verification system based on the principles of “novelty” and “non-obviousness.”

Since Patent No. 1, we can observe ten periods in which the next one million patents have been granted by the USPTO. The time to reach the next milestone million was getting shorter over time – with the exception of the last million (and the third million). It took five years from patent no. 9,000,000 to patent no. 10,000,000 – more than twice as long as between the “fastest million” from 2011 to 2013. This means that in recent years either fewer patents have been filed, or the review and granting process has slowed down. 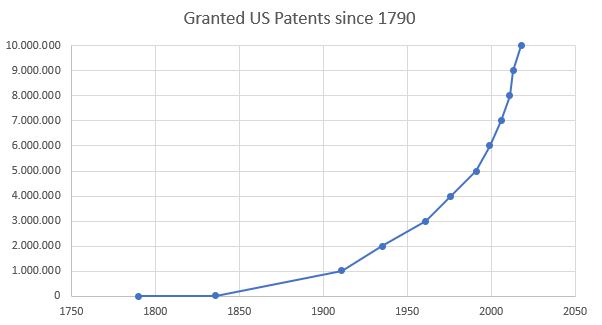 Overview of all 10 “Milestone Patents”

Diagram: By the author