Saint Peter and Pontiff before court

Pentecost is closely connected with the name of Saint Peter: in his famous Pentecost speech, Peter explains the sudden speaking of the disciples in other languages by the Holy Spirit, several thousand people are baptized after his speech – the early Christian church is born. But Saint Peter is also the focus of a long trademark dispute in France: the name “Petrus” is not protected, is the latest judgement. 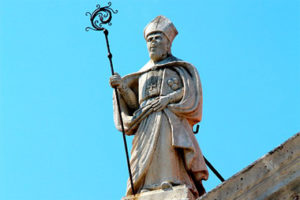 What is probably understandable outside France is a thunderhall in the wine country of France. The famous Château Petrus and the Moueix family in Pomerol not only have the name Saint Peter (i. e. Petrus)  as part of their own name, but also use it to market the wines produced there. These are absolute premium wines, also known as “Rolls” from Pomerol.

Saint Peter CGM also wanted to use, which had decided to name its wine “Petrus Lambertini Major Burdegalensis 1208” after the first mayor of Bordeaux in the eleventh century. On 2 December 2010, Jérôme and Stéphane Coureau applied to CGM for registration of the mark “Coureau & Coureau Petrus Lambertini Major Burdegalensis 1208”. In 2011, Château Petrus noticed this wine and filed a complaint for counterfeiting, false advertising and deception.

In the first instance, Château Petrus won, and CGM appealed. In April 2018, the Court of Appeal overturned the judgment and ruled against Château Petrus. In the Court’s view, it had not been established that the accused’s business practice in question could have been misleading and contained false information. The court also humorously pointed out the large price difference between a Château Petrus wine and a CGM wine. It is difficult to confuse a wine sold for ten euros with a Château Petrus worth thousands, the court assumed.

However, Château Petrus has already announced that it will appeal to the Supreme Court.

As a matter of legal principle, personal names and pseudonyms can be protected as trademarks, as the European Court of Justice ruled in 2004 (ECJ, 2004, Nichols). However, if he is a well-known person, the case of Marlene Dietrich has set an additional legal standard in Germany (Marlene-Dietrich-Bildnis, 2008). The Federal Court of Justice (BGH) specified that the name and image of a well-known person are excluded from registration for goods and services which may deal thematically with the respective personality. Moreover, the German Patent and Trade Mark Office (DPMA) examines only the general conditions for registration and the existence of absolute grounds for refusal when filing the application. Registration against the will of the actual holder of the name is therefore not excluded. However, the latter may then request the cancellation of the trademark at any time. In the case of deceased persons, the postmortem right of personality then passes to close relatives.

In Germany, the name Pontifex was already excluded from trademark protection in 2008. (BPatG, decision of 23.04.2008 – 26 W (pat) 117/06) Similar to the French Petrus wines, Pontiff should be registered for various beverages and beers, including those containing alcohol (Class 32 and Class 33) “. However, the Federal Patent Court found it religiously offensive to “claim the common names of the head of the Catholic Church exclusively for himself and to use them permanently for commercial purposes on the beverage market in a religiously offensive manner”.