Great News from the World Intellectual Property Organization (WIPO): International patent and trademark applications reached record levels, increasing by 7.3% and 7.2% respectively. International design applications grew by 13.9% in 2016. Videos, Infographics and even more information in our article:

Overall, applicants based in the United States maintained their number one ranking for the 39th year running, accounting for roughly a quarter (24.3%) of the 233,000 applications filed under WIPO’s Patent Cooperation Treaty (PCT) in 2016 – itself a 7.3 percent year-on-year increase  – followed by applicants in Japan (19.4%) and China (18.5%), with the latter driving the overall growth in demand. Digital communications and computer technology showed the greatest activity by sector.

Similar to the PCT, demand grew by 7.2 percent for WIPO’s international trademark filing service (Madrid System), which saw 52,550 applications, while the number of industrial designs handled by WIPO’s Hague System rose 13.9 percent to 18,716 – it is the seventh year in a row of growth in all three WIPO filing systems, which save filers time and money.

“In an interlinked, knowledge-based global economy, creators and innovators  are increasingly relying on intellectual property to promote and protect their competitive edge around the world,” said WIPO Director General Francis Gurry. “China-based filers are behind much of the growth in international patent and trademark filings, making great strides in internationalizing their businesses as the country continues its journey from ‘Made in China’ to ‘Created in China’.” 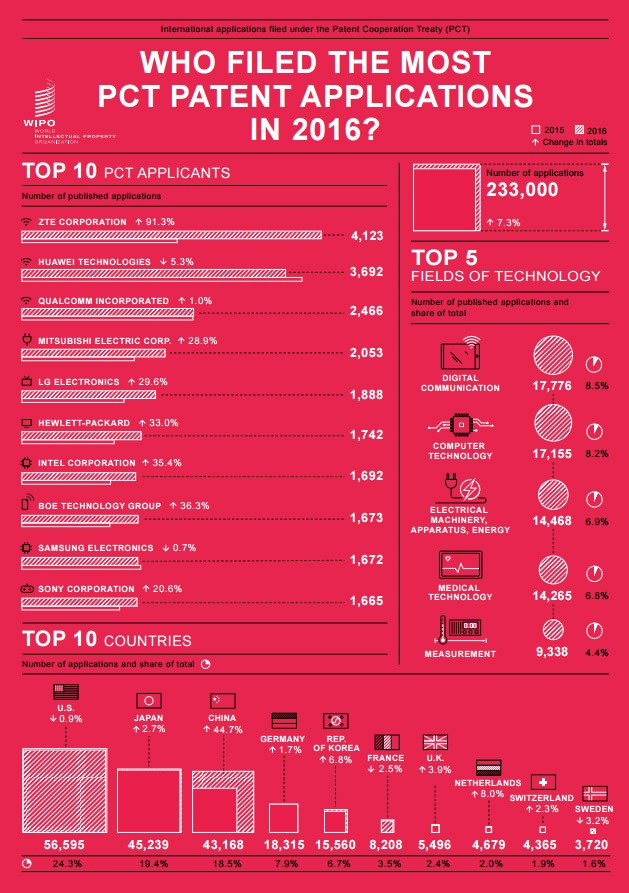 In 2016, U.S.-based applicants filed 56,595 PCT applications, followed by applicants from Japan (45,239) and China (43,168), which has posted double-digit growth each year since 2002. If this current trend continues, China will overtake the U.S. within two years as the largest user of the PCT System. Germany and the Republic of Korea with 18,315 and 15,560 applications were ranked fourth and fifth, respectively. China and India (1,529) are the only two middle-income countries among the top 15 origins.

Shenzhen -based telecoms companies – ZTE Corporation (4,123 published PCT applications) and Huawei Technologies (3,692) –  occupied the top two spots in the list of top PCT applicants, with ZTE moving up two spots to push Huawei out of the leader position. They were followed by Qualcomm Incorporated of the U.S. (2,466), Mitsubishi Electric Corporation of Japan (2,053) and LG Electronics of the Republic of Korea (1,888). The top 10 applicant list comprised seven companies from Asia and three from the U.S..

Among educational institutions, the University of California  – with 434 published PCT applications – was the largest user of the PCT System and has maintained that position since 1993. Massachusetts Institute of Technology (236) was ranked second followed by Harvard University (162), Johns Hopkins University (158) and the University of Texas System (152).

While the top 10 is dominated by U.S.-based institutions, top 20 list consists of 10 U.S. and 10 Asian universities. 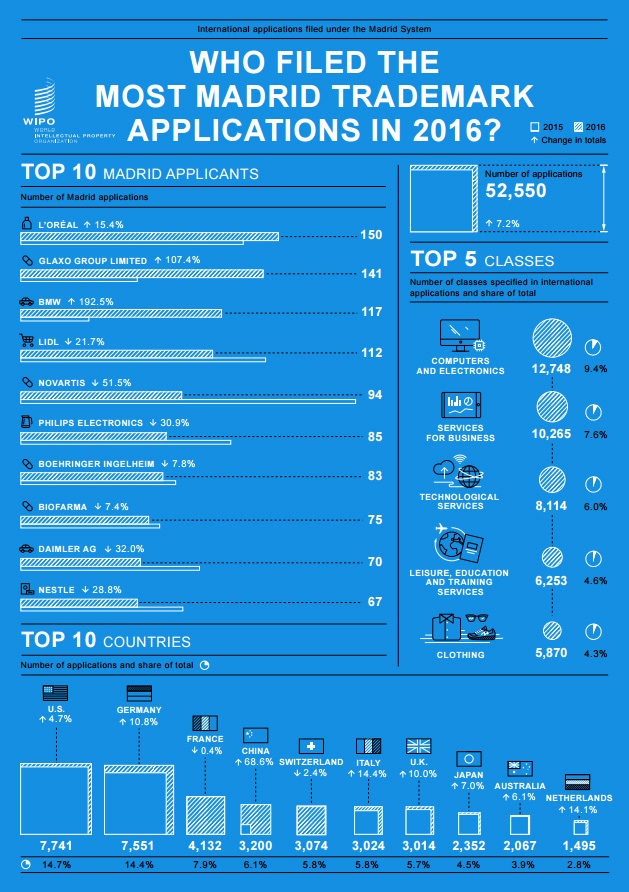 L’Oréal of France with 150 applications headed the list of top filers, followed by Glaxo Group of the U.K. (141), Germany’s BMW (117) and Lidl (112). Swiss company Novartis, which was ranked in first position in 2015, filed 100 fewer applications in 2016 and with its 94 applications now ranks in fifth position. 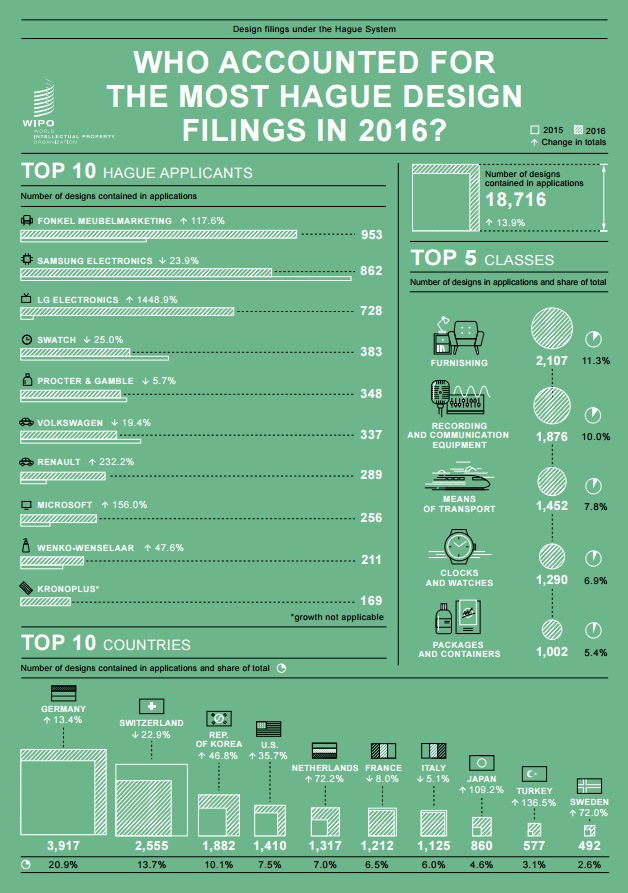 Fonkel Meubelmarketing of the Netherlands (953 designs) overtook Samsung Electronics of the Republic of Korea (862) as the largest user of the Hague System. The Republic of Korea’s LG Electronics with 728 designs was in third position, followed by Swatch of Switzerland (383) and Procter & Gamble of the U.S. (348).

Furnishing accounted for the largest share of total designs (11.3%), followed by recording and communication equipment (10%), means of transport (7.8%) and clocks and watches (6.9%).

Do you want to apply for a Patent, Trademark or Industrial Design?

We can help you with that! Request a call-back without any obligations now.