A first name can be used as company name and trade name – but what if the first name Otto is also a registered famous trademark? In the case Otto mail order company against Otto’s Burger it  was ruled by court yesterday, no likelihood of confusion was seen for the company’s trademark “Otto”. 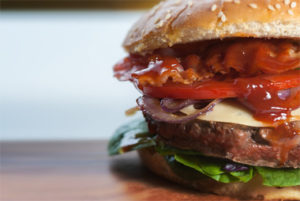 Yesterday, the Hamburg District Court (LG Hamburg) dismissed the mail order company Otto’s action against “Otto’s Burger” (dated 10.07.2018, not yet published, ref. 406 HKO 27/18). The German mail order company had seen an infringement of the company wordmark “Otto”  and had filed suit on the grounds of infringement of trademark rights and suspicion of unfair competition. The plaintiff Otto GmbH & Co. KG is the owner of the word mark no. 30126772 “OTTO” for “wholesale and retail services for goods in classes 1 to 34” – including class 25 (“articles of clothing”). The defendant is Daniel MacGowan, owner of “Otto’s Burger”, who runs four restaurants under this name in Hamburg. The name of “Otto’s Burger” follows his statement after the name of an alleged burger inventor.

According to Wikipedia Germany, the exact development of the word “hamburger” is not known. There are competing theories about the origin of the hamburger and also about the inventor of the burger. Otto Kuase is mentioned in English Wikipedia as one of the possible inventors, with White Castle, an American regional burger chain in the Midwest, being cited as the source. According to Wikipedia, five other persons are also considered possible inventors.

The parties had been arguing about the name “Otto’s Burger” since 2015. According to information from German TV NDR, MacGowan had initially protected the name not only for the food class, but also for clothing – in order to keep the option open to later be able to sell merchandising articles under the name. Could it therefore be assumed that the traffic in question would assume that clothing under the “Otto’s Burger” brand is actually clothing under the “Otto” brand? Or that the mail order company now also operates as a burger restaurant?

The Hamburg Regional Court saw no likelihood of confusion. It was also decisive for the decision that the business fields of both companies were too different, a court spokesperson informed. There was no violation of the company’s trademark “Otto” because the guests addressed by the four burger restaurants did not associate “Otto’s Burger” with the mail-order company’s trademark.

Otto is a common first name – therefore no risk of confusion

In addition, the regional court pointed out that “Otto” was a common first and last name, so that there was no danger of confusion. However, naming law is increasingly a contentious issue in trademark law. Only recently, in the KENZO versus KENZO ESTATE case, the ECJ ruled in favour of the earlier trademark proprietor “KENZO”. And Kenzo is also a common first name – in Japan (Info Blog: KENZO victorious before the ECJ).

Company Otto lost its “Otto” mark for clothing in 2005

Another interesting aspect of this case is that Otto-Versand had already lost a trademark dispute before the Federal Supreme Court (BGH) in 2005, but with a different complaint and completely different justification for the judgement. In this case of a trade mark registered for goods, the right-preserving use required presupposes that the public establishes a direct link between the trade mark used and a specific good. The BGH found in 2005 that this was lacking in the dispute because a large number of goods – including those of well-known brand manufacturers – were offered in the catalogues bearing the “OTTO” mark. However, the decision of the Federal Supreme Court forced Otto-Versand to agree to the cancellation of the trademark for the “Otto” garments in 2005 (press release of the Federal Supreme Court No. 109/2005 I ZR 293/02 ).

The Otto GmbH & Co. KG therefore refers to the “Otto” brand for clothing without Otto mark clothing. According to the Federal Supreme Court, however, it is not relevant whether a private label for goods is operated in this sector, but only how consumers perceive the goods sector.

The BGH already decided in a judgement of 31.10.2013, (Az. I ZR 49/12), over the similarity between goods and retail trade services. In this case, Otto GmbH & Co. KG brought an action against a retailer of sports fashion, including baseball caps under the names “OTTO CAP”, “OTTO Trucker Cap”. The BGH clarified that goods and retail services relating to these goods may be similar within the meaning of Sec. 14 (2) No. 2 MarkenG. And for Otto GmbH & Co. KG, the judgement resulted in a partial victory: the disputed baseball caps were actually prohibited, but not because of an infringement of the word mark “Otto”, but because of the protection of the reputation of the action mark “Otto” (pursuant to Section 14 (2) No. 3 MarkenG). Moreover, the mail order company Otto wanted to claim an infringement of its word mark “Otto” in a unique position. However, this was rejected by the BGH.

The Hamburg Regional Court’s ruling can therefore be eagerly awaited – and not only by Otto GmbH & Co. KG, which has already announced that it reserves the right to take further legal action. Company Otto loses in the brand dispute over “Otto’s Burger” – for the moment.