NEUSCHWANSTEIN can be a word mark. Although Neuschwanstein can be located geographically by the famous castle of the same name, it is not an indication of geographical origin. 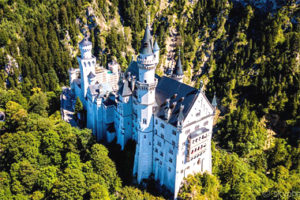 A trademark dispute over the most famous castle in Germany that lasted for years was decided today before the European Court of Justice (ECJ, C:2018:673). Plaintiff is the Federal association souvenir – gifts – honorary prices registered association. (BSGE). The action was directed against the Free State of Bavaria, which in 2011 had the word mark protected as a Union trademark at the European Trademark Office (EUIPO) in 17 different Nice classes. Already in 2005, the Free State of Bavaria had filed the national word mark NEUSCHWANSTEIN with the German Patent and Trade Mark Office (DPMA). With today’s judgment, the court contradicts the plaintiff’s accusation that the word mark Neuschwanstein contains information which serves to designate the geographical origin, since it can be localised geographically.

In the previous instances, this was a much-discussed issue. The Board of Appeal of the EUIPO had established in 2015 (T 167/15) that Neuschwanstein could be “geographically localised” but was not a “geographical place” because the main function of the place was the preservation of the cultural heritage and not the production or marketing of souvenir articles or services. The Board of Appeal also concluded that the relevant public would recognise that all goods designated NEUSCHWANSTEIN were manufactured, marketed or supplied under the control of the Land of Bavaria.

The plaintiff contradicted this: the Neuschwanstein Castle was clearly and unchangeably locatable and, contrary to the opinion of the court, differed from a normal museum, which was determined by the exhibits shown therein, which – unlike the Neuschwanstein Castle – could also be relocated. In addition, the initial ruling also contradicted the requirements of the ECJ in its “Chiemsee” ruling (C:1999:230), since the targeted public relates goods marked with the sign “Neuschwanstein” to Neuschwanstein Castle as a world-famous tourist centre. According to the German Souvenir Association, the “Neuschwanstein” label serves tourists exclusively as a reminder of their visit to the place of interest and the place of sale. Whoever is the manufacturer is indifferent to the target groups.

Accordingly, the challenged mark is devoid of any distinctive character. An article bearing the word “München” would necessarily be different from an article bearing the word “Hamburg”, since consumers could assume that the former was manufactured in Munich and the latter in Hamburg. It is therefore a circular argument, since the sign ‘NEUSCHWANSTEIN’ designates not only the castle in its capacity as a museum but also the challenged mark itself, according to the argumentation of the plaintiff.

Nobody considers the castle to be a place of production

In its ruling today, the the ECJ dismissed the action brought by BSGE, and followed the argument of the Advocate General – we reported (NEUSCHWANSTEIN and its geographical origin before the ECJ).

There is a general interest in keeping geographical designations free, since the preferences of consumers can be influenced. However, the lock as such was not a place of production of goods or provision of services, so that the challenged mark could not provide any indication of the geographical origin of the goods and services it covered. The ECJ also referred to the argument of the Advocate General (we reported) that the Nice Classification does not know a class of goods or services “souvenir articles”.

Precisely because the disputed mark is not descriptive in character, the Free State of Bavaria is not precluded from applying for registration of the name of the museum location of which it is the owner as a Union trade mark, since Regulation No 207/2009 does not, in principle, preclude that.

The Court’s finding that the challenged mark is not descriptive of the geographical origin of the goods and services covered by it does not say anything about its distinctive character; on the contrary, it constitutes a necessary condition for the registration of a mark which has even a weak distinctive character. It is precisely because the contested mark is not descriptive that it can be applied for as a Community trade mark. There is therefore no circular reasoning.

By the way, the fact that in the present case the Free State of Bavaria is the applicant is not relevant in this case, since the same principles apply to a State as applicant for a trade mark as apply to other operators on the market.