MIKADO: Use as a trademark from the shape of goods

The French manufacturer of the well-known MIKADO chocolate bars has won an appeal before the European Court of Justice. The protected earlier 3 D colour mark combined with the brand name MIKADO was recognised as a mark from the shape of the product and as a necessary proof of genuine use of the earlier mark.

Proof of use of the mark: a colour mark associated with MIKADO 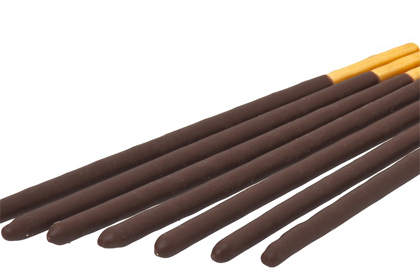 In November 2008, Lotte Corp. filed an application for a Union figurative mark showing chocolate bars containing the word element “Pepero Original”. In April 2015, Générale Biscuit-Glico France, manufacturer of the well-known MIKADO chocolate bars and intervener, filed an application for annulment of the contested Union figurative mark Pepero. In doing so, it relied on its own three-dimensional French colour mark registered on 19 October 2005 in Nice Class 30 for the goods ‘biscuits coated or covered, in particular, with chocolate or caramel’ with an image of a chocolate bar.

2- or 3-dimensional color mark of the MIKADO chocolate bars?

The applicant Lotte Corp. claimed that the earlier mark had changed its distinctive character. The earlier colour mark is a two-dimensional figurative mark representing those goods in a horizontal position, but proof of use of the earlier mark was furnished only in goods sold in three-dimensional form. The European Court of Justice (CJEU) called this an erroneous assumption. The CFI clarified that the earlier mark was a three-dimensional mark. And a three-dimensional mark may, if necessary, acquire distinctive character through use, even if it is used in conjunction with a word mark or figurative mark. That is the case if the mark consists of the shape of the product or its packaging and if it systematically bears a word mark under which it is marketed.
The European Court recalled that a product may bear several marks simultaneously and that the acquisition of distinctiveness of a mark may result from its use in conjunction with another registered mark – as long as consumers perceive the goods concerned as originating from a particular undertaking.

Is the Pepero mark distinctive?

The Board of Appeal found that the figurative element of the contested Union figurative mark, consisting of a bundle of chocolate bars, was so distinctive that, together with the word element “pepero”, it had a dominant character. The applicant contested that assessment, arguing that the word element “pepero” was the dominant element of the contested mark because of its nature, size, central position and lack of association with the goods in question. The CJEU rejected the applicant’s arguments. The applicant submits that the word element ‘pepero’ has a normal distinctive character since it has no particular meaning for the goods covered by the contested mark. Furthermore, the applicant submits that the consumer in the supermarket is more guided by the general visual impact of his labels or packaging. The figurative element of the Pepero mark is dominant in that context.
In addition, the CJEU pointed out that no proof of a likelihood of confusion is necessary to satisfy the condition for the existence of identity or similarity of the opposing signs under Article 8(5) of Regulation 2017/1001. It is sufficient that the degree of similarity between these two marks leads the relevant public to establish a link between them, the CJEU held.

Maybe this article is also interesting in this context: