The newest Version of the “Madrid Yearly Review” is out now. The MYR claims to be the plattform for comprehensive facts, figures and analysis of the international registration of marks. Right away: The amount of applications has grown but the registration-rate has (significantly) decreased. All key facts in our article:

An estimated 52,550 international trademark applications were filed under the WIPO-administered Madrid System in 2016 (figure 1). That is a record number. The annual growth rate of 7.2% was the fastest recorded since 2010 and much faster than 2015’s modest increase of 1%. The increase was driven by strong growth in applications from both China and Germany. China’s increase accounted for more than one-third (36.8%) of total growth, while that of Germany represented about one-fifth (20.8%).

For the third year in a row, the United States of America (U.S.) remained the largest user of the Madrid System. International applications filed by applicants located in the U.S. reached 7,741. These were followed by applications from Germany (7,551), France (4,132) and China (3,200). 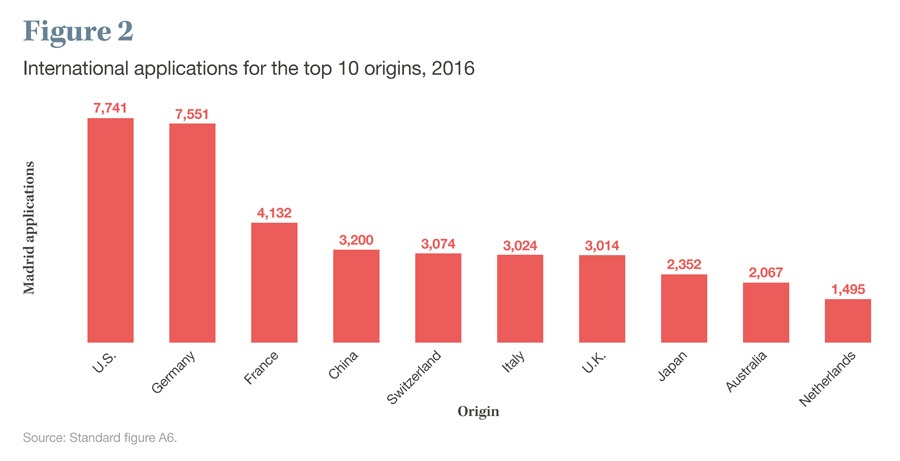 Applicants domiciled in China filed about 1,300 more Madrid applications in 2016 than in 2015. The resulting remarkably high growth of 68.6% pushed China from ninth largest origin in 2015 to fourth largest in 2016. Combined, the top 10 origins of applications accounted for 72% of all international applications filed in 2016. Applicants from Madrid member countries located on the European continent filed 62.2% of all international applications, followed by those in Asia (17.5%), which has seen an increase of about seven percentage points compared to its share a decade earlier.

Fourth-ranked China, 12th-ranked Turkey (1,221) and 13th-ranked Russian Federation (1,176) are the only three middle-income countries appearing in the top 20.

This decrease was mainly due to the deployment of a new back-end IT system in 2016, which occasioned a temporary contraction of the production capacity of the International Bureau (IB) of WIPO. It should be noted, however, that registrations can fluctuate considerably from one year to the next due to a number of factors, such as the time it takes for international applications to be processed at offices of origin before being sent to the IB, and the processing time required at the IB itself. 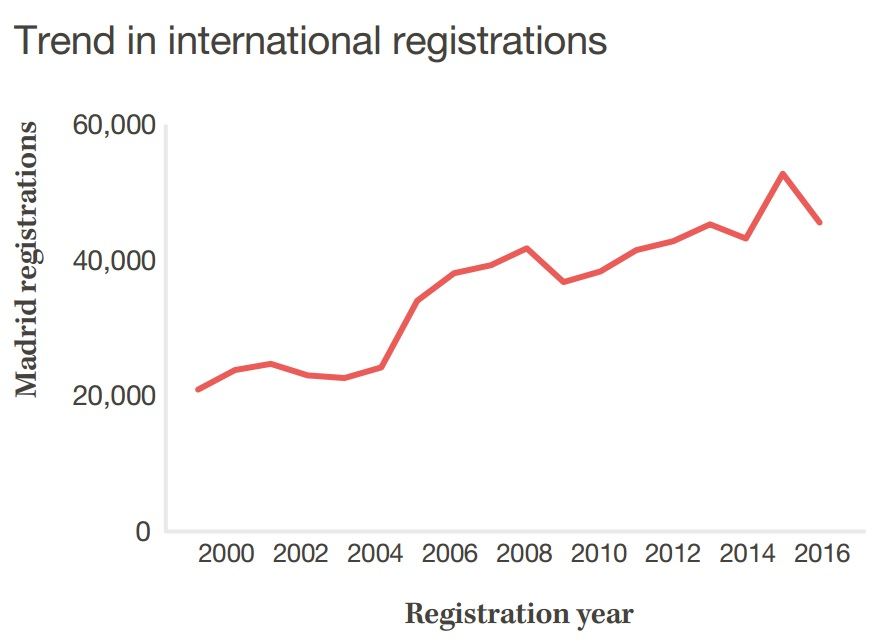 Due in part to Madrid System accessions and the incentive for holders to extend protection to new members’ jurisdictions as well as existing ones, the number of subsequent designations increased from about 26,000 in 2000 to 45,633 in 2016. 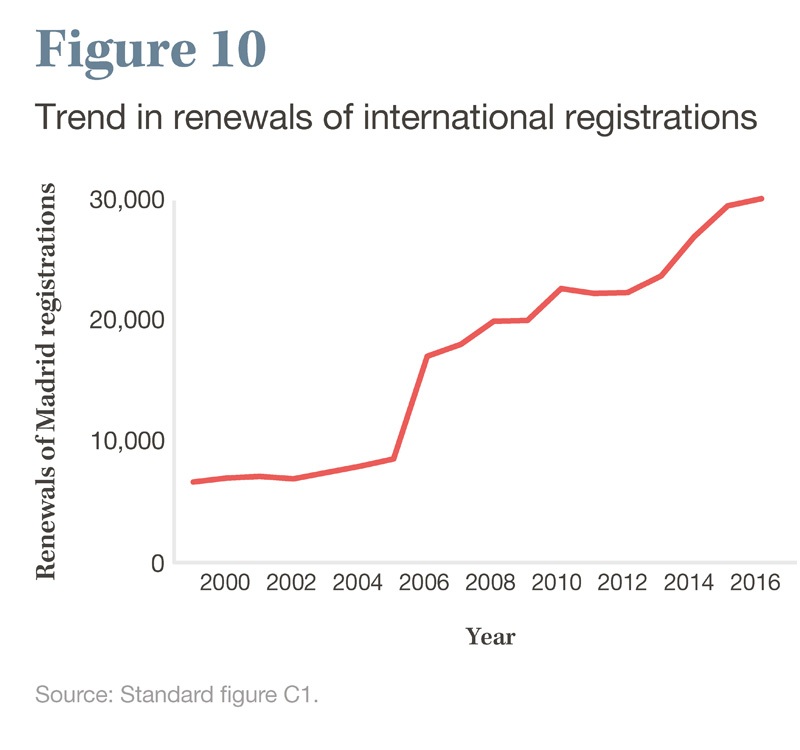 Holders from Germany (7,726), France (4,546) and Switzerland (2,573) recorded the highest numbers of registration renewals in 2016, reflecting these countries’ long-standing membership of the Madrid System. Their holders’ stocks of international registrations have often been maintained for many decades. Together, these three origins accounted for half of all renewals in 2016. Although half the top 20 origins for renewals in 2016 saw near-zero growth or declines compared to the previous year, several recorded increases in excess of 30%, namely Hungary (+83.3%), Finland (+40%), Sweden (36.9%) and the Russian Federation (+31.7%).

Statistics on administration, revenue and fees

Electronic transmission was introduced in 1998, and its share of total transmissions had reached just 0.2% by the end of that year. Since then, the share of applications received electronically by the International Bureau (IB) has increased significantly. In 2013 and 2014, slightly more than half (52%) of all applications received by the IB were transmitted electronically by all offices of origin combined. This share increased by almost 23 percentage points to reach 74.5% in 2016. 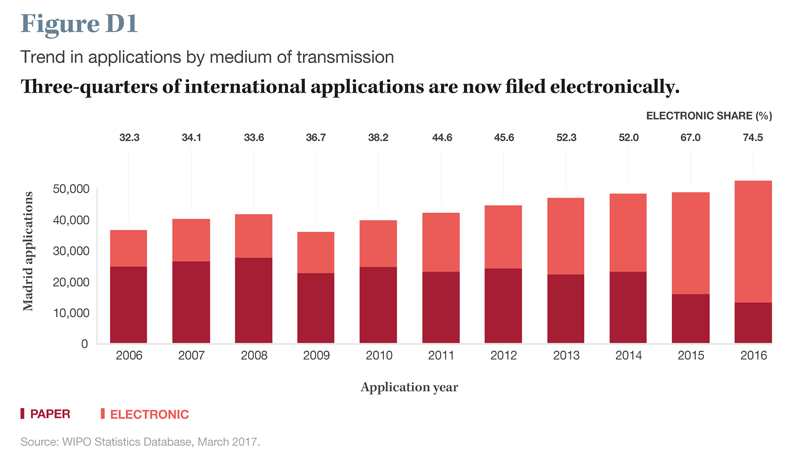 In 2016, 81.6% of applications were filed in English, with French accounting for 15.8% and Spanish for 2.7%. The low share of filings in Spanish since its introduction as a filing language in 2004 is due to the fact that, to date, the Madrid System includes only four Spanish-speaking countries (Colombia, Cuba, Mexico and Spain), with Spain the only one listed among the top 20 origins of international applications.

An international registration may change ownership following assignment of a mark, the merger of one or more companies, a court decision, or for other reasons. The change is subject to the recording of the new owner as the new holder of the registration in the International Register, and the new holder must fulfill the requirements necessary for holding an international registration. These include having the required connection to a Madrid member, which means being a national of, or being domiciled in, or having a real and effective industrial or commercial establishment in a Madrid member’s jurisdiction. 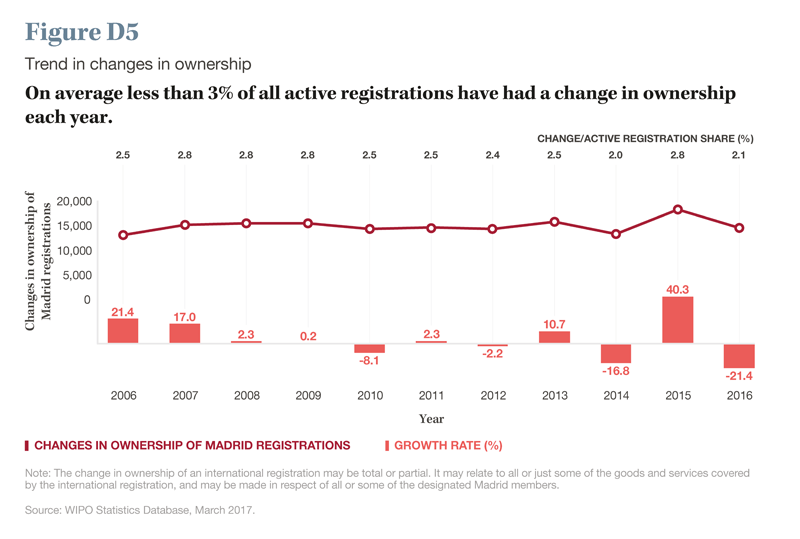 In editions of the Madrid Yearly Review before 2016, many indicators were based on international registration data. With the aim of better understanding the behavior of an applicant when first filing a Madrid international application, the 2016 and 2017 editions enlarged their scope by primarily focusing on application data, albeit while still reporting pertinent registration statistics.

The application statistics used are based on the original filing date at a Madrid member office of origin. This removes the time lag between the date on which an application is first filed at an office of origin and the date it is received and recorded by WIPO. The 2016 data on applications by origin are estimated, as not all applications filed at offices of origin had been transmitted to WIPO at the time the Review was drafted. Data published in WIPO’s press release of March 15, 2017 and related infographics may slightly differ from those published in the Review, because these data are continually updated as WIPO receives more data from offices of origin of Madrid members.