HP victorious: even two letters can be an Union trademark

Hewlett Packard won before the European Court of Justice: the American company may register the two letters “HP” being a wordmark as well as a figurative symbol from those two letters as Union trademarks. As is often the case, this judgement was also about the question of when a trademark is descriptive.

Descriptive terms are generally excluded from protectability. The idea behind this is that general descriptions of product features or services should not discriminate against potential competitors. Similarly, a combination of descriptive elements and a non-distinctive graphic must also be refused as a trademark application.

In the case of the Hewlett Packard Group, the Polish company Senetic had filed an opposition against the Union trademarks applied for because HP were descriptive of the technical goods and services in question and, moreover, had no distinctive character. (ECLI:EU:T:2018:215). The Polish company argued: “Two letters and a circle are perceived by the general public as a technical indication of the type of product, as is customary in technology”, therefore the pictogram HP was purely descriptive. The same applies to the financial services sector. The Hewlett Packard Group had applied for the contested marks for the Nice classes 2, 7, 9, 16, 35 to 38 and 40 to 42. And in fact, the class comprises 36 financial services.

However, the EUIPO Board of Appeal rejected this opposition and the European Court of Justice now upheld that decision.

Can HP be used in a manner descriptive of goods or services? 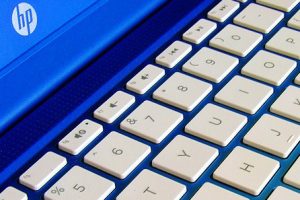 It is not necessary that’at the time of filing, the signs and indications which make up the trademark must actually be used in a manner descriptive of goods or services, such as those for which the application is filed, or of the characteristics of those goods or services’. The decisive factor is whether the signs can be used for such purposes. According to the Court, it is sufficient for one of its possible meanings to designate a characteristic of the goods or services in question. In such a case, the trade mark application should be refused. However, in the ECJ’s view, the evidence provided by Senetic did not establish a sufficiently direct and concrete link between the HP sign and the goods and services in question.

Specifically, the ECJ stated that “it cannot be generally claimed that a mark is not distinctive or descriptive simply because it consists of one or two letters”. Relevant public would understand the term’HP’ as a reference to the names Hewlett and Packard, the surnames of the founders of the undertaking. It follows from that that the contested marks have a minimum degree of distinctiveness.

Finally, the ECJ also dealt with the accusation that Hewlett Packard Group acted maliciously when they applied for the disputed Union marks. They should have known that “two-letter characters are usually used to designate a type or standard” of the services in question.

The court ruled on the subject of malice:
An applicant for a trade mark which may be confused with an existing trade mark only acts maliciously if the applicant’s intention is already apparent at the time of filing. However, the applicant’s intention can only be determined individually for each case and is “a subjective factor”. As an example, the ECJ cites the 2009 judgment, Chocoladefabriken Lindt & Sprüngli (C-529/07, EU:C:2009:361). In particular, a malicious intent is more likely if a sign is to be protected as a Union trade mark without the intention of using it.

In the present case, however, the plaintiff Senetic had provided’no direct or objective evidence’ of malignancy on the part of HP. The ECJ therefore rejected all of Senetic’s claims and confirmed the previous decisions of EUIPO and the Board of Appeal of EUIPO. The Hewlett Packard Group can register the letters HP as the desired Union trademarks.