ECJ denies rebranding of goods before their EU import

The European Court of Justice today rejected the rebranding of goods before their first EU import and thus significantly strengthened the rights of trademark owners. In its reasoned verdict on Mitsubishi forklifts, the ECJ challenges the Advocate General’s Opinion.

Rebranding of Mitsubishi forklift trucks under the customs warehousing procedure 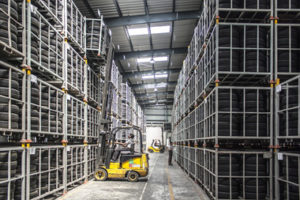 In the present case, the defendants acquire Mitsubishi forklifts outside the EEA without the consent of plaintiff Mitsubishi, which they import into the territory of the European Economic Area (EEA) where they are placed under the customs warehousing procedure.

While these goods are still in the process, the Duma and GSI will completely remove the marks identical to the Mitsubishi marks from the goods, make changes to bring them into conformity with the applicable Union law, replace the identification plates and serial numbers, affix their own marks to the goods and then import them into the EEA and distribute them inside and outside the EEA.

Mitsubhishi and MCFE brought an action before the Brussels Commercial Court before 2008, seeking an injunction against parallel trade and the removal and reinstallation of the marks. The first instance dismissed the action in 2010 and the plaintiffs appealed against it.

The Brussels Court of Appeal (Hof van beroep Brussel) referred the following questions to the European Court of Justice (ECJ) for a preliminary ruling:

This is a spicy and important case involving not only Community trade mark law but also customs legislation and unfair competition rules.

Today’s judgment of the ECJ strengthens the trademark owners

In today’s judgment, the ECJ found that the owner of the mark may oppose such rebranding under Article 5 of Directive 2008/95 and Article 9 of Regulation No 207/2009. The proprietor of a trade mark may oppose’the fact that, as in the main proceedings, a third party, without his consent, removes all signs identical to that mark and affixes other signs in respect of goods entered for the customs warehousing procedure with a view to their import into or placing on the market in the European Economic Area (EEA) where they have never been marketed.

In detail, the ECJ judges such behaviour as follows:

Political dimension of the judgment

There is also a significant political dimension to today’s judgment. The German government is in favour of a negative answer to the questions submitted, and the European Commission is in favour of an affirmative answer to the questions submitted. The Commission argued that the Duma and GSI had used the customs warehousing procedure to transport the forklifts into the EEA with the aim of handling their importation in the prescribed form; in this case it was irrelevant that the removal of the marks from the goods could be illegal from the point of view of unfair competition.

Today’s judgment of the European Court of Justice also affirms the questions referred for a preliminary ruling. It is irrelevant that the removal of the signs identical to the mark and the affixing of new signs take place while the goods are still in the customs warehousing procedure, since these operations take place with a view to the import and the placing on the market of these goods in or within the EEA, the ECJ clarified.

Use of the trade mark in the course of business

The Advocate General took the view that the complete removal of the mark cannot be seen as a use of that mark (Article 5 of Directive 2008/95/EC and Article 9 of Regulation (EC) No 207/2009). Because the use of a trademark must take place “in the course of business”. The goods had not previously been placed on the market in the European Economic Area because they were in a customs warehouse.

In its ruling on Mitsubishi forklifts, the ECJ contradicts the rebranding before the first import – and also the Advocate General’s opinion.