Is the Union figurative trademark “ALPINEWELTEN Die Bergführer” descriptive? The Court of Justice of the European Union did not recognise a sufficiently original stylized representation in the figurative element and thus held the signs in question to have a descriptive character.

The plaintiff, the Alpine Welten Die Bergführer GmbH & Co. KG, is a provider of guided mountain tours on domestic and world-famous mountains as well as for Alpine training in all mountain sports. In 2016, this company registered the company’s name “Alpinewelten Die Bergführer” (German, in engl: ALPINE WORLD The mountain guides) with the corresponding logo as a Union figurative trademark at the Office of the European Union for Intellectual Property (EUIPO). Registration should be made for the following Nice classes:

EUIPO and Board of Appeal see descriptive character 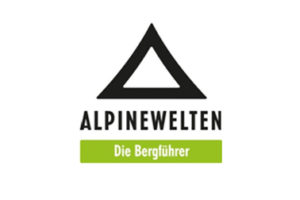 The EUIPO accepted the registration for Class 25 but refused it for Classes 16, 39 and 41 on the ground that the desired Union figurative mark was descriptive for the services mentioned therein. This assessment was also shared by the Board of Appeal of the EUIPO. The Board of Appeal based its decision on the fact that German-speaking customers were to be regarded as the relevant public. And these would immediately and without further thought associate the corresponding services with “ALPINEWELTEN Die Bergführer”. Also, the graphic elements of the mark applied for could not call into question the dominant character of the word elements in the overall impression, but rather serve to further underline the conceptual content of the words. The simple triangle immediately evokes the simple representation of a mountain and the green color of the rectangle reminds one of nature.

In order to assess the descriptive character of a mark, which consists of several word and figurative elements, not only the individual elements of the mark are examined, but also the mark as a whole. Although each of these components is descriptive in itself, the combination of the two cannot be descriptive.

The applicant argued that the Union figurative mark in dispute was not descriptive. The applicant submits that the triangle in the mark applied for has other meanings than the representation of a mountain and can therefore also be interpreted differently. In all other respects, the illustrated element was stylised creatively and originally, and on that basis alone distinctiveness was established.

In its judgment, the Court of Justice of the European Union (CJEU) made it clear that it did not share this view. The triangular shape in the present case is not unusual and not so visually striking that it distracts from the descriptive character. In connection with the word component, the triangle is a simple representation of a mountain. And the word element “ALPINEWELTEN Die Bergführer” has a dominant character in the disputed Union figurative mark. Only in the case of a special presentation leading to a sufficiently distinctive overall impression could a sign consisting of verbal elements and a simple geometric form be eligible for protection, the CJEU clarified.

The court pointed out that a sign in accordance with Article 7(1)(1) c of Regulation No 207/2009, if at least one of its possible meanings designates a characteristic of the goods or services in question. In the present case, it is therefore of no importance whether the triangle can also stand for other meanings, but merely that it can be regarded, among other things, as a representation of a mountain. The Board of Appeal was therefore right to consider the mark applied for to be descriptive within the meaning of Article 7(1)(1) c of Regulation 207/2009. In the overall view, it may serve to describe a characteristic of the goods and services concerned. The Court therefore dismissed the action and confirmed the refusal of Union figurative mark in question for Classes 16, 39 and 41.