Few things are as famous in the world as the blue striped white cotton clothing of Mother Teresa. Now the former lawyer of the nuns has secured the rights to Mother Terasa’s cowl and placed it in the Indian trademark register.

Trademark as a protection of Mother Teresa’s reputation 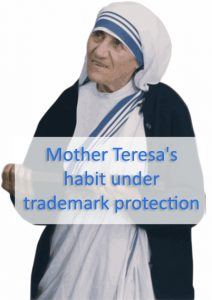 This was the first time a religious clothing was given protection. The reason for that trademark protection is to prevent the use for advertising or other forms of misuse of the reputation and preseration of the memory of the nun’s. In the 50’ths Mother Teresa established the Missionaries of Charity in India dispersing all around the world. Thousands of nuns belonging to the Missionaries of Charity wear the famous clothing of Mother Teresa. It has now become the religious uniform of this global order. The famous nun died in 1997. Mother Teresa was even canonized by Pope Francis in 2016.  In the same year the trademark holder, Biswajit Sarkar, formally ensured the right to her habit, but only recently this fact was publicised.

“There are many organisations starting schools naming themselves after Mother Teresa, and wearing the uniform, where the Missionaries of Charity have no connection”. (Quote: The Guardian, july 10th 2017)

On the other hand some rumor and criticism about the merits of Teresa’s charitable work already blur her reputation. It is possible, that even non-governmental organisations (NGO), schools and organisations now will be affected by the trademark protection of Mother Teresa’s habit. Biswajit Sarkar is a Kolkata-based lawyer who works pro-bono for the order. Lawyer Sarkar said his next goal was to copyright Mother Teresa’s name and the distinctive uniform of her order in other countries.

The Indian Patent and Trademark Office is member of Madrid Protocol

Maybe you want to have a look at the Madrid Protocol? Please look here.

The Indian Patent and Trademark Office is member of Madrid Protocol and has joined the PMMA since 2013.

The Office of the Controller General of Patents, Designs & Trade Marks (CGPDTM), official name of the Indian Patent and Trademark Office, is member of Madrid Protocol and has joined as well the Protocol Relating to the Madrid Agreement Concerning the International Registration of Marks (PMMA) since 2013.
The Madrid Protocol enables its members a simultaneous registration in different countries by filing one single “international” trademark application instead of filing several separate national or regional trademark applications.

International registration for patents via PCT

The Indian Patent and Trademark Office (CGPDTM) covers both trademark law and patent law. This, the Indian Patent law, is regulated in the Patent Act and the Patent Rules. Textile patents and process patents are granted, even pharmaceutic products, food and chemical substances are patentable in India. Nevertheless there a actually some judicial conflicts especially concerning questions about new forms of already known substances with medical relevance.

We would moreover call your attention to the advantages of  a patent application via PCT.  This ist the short form of “Patent Cooperation Treaty” and is open to every state that is member of the Paris Convention for the Protection of Industrial Property. It is possible to achieve patent protection for an invention simultaneously in nearly 150 countries by allowing to apply for an international registration by only one request submitted to the national register office.

Have a look at the complete Process of filling a PCT-application  https://legal-patent.com/en/patent-law/the-advantages-of-a-pct-application/

You wonder how to plan your application? For a trademark via Madrid Protocol or for a patent via PCT?

Our patent attorneys are experienced in trademark and patent law, some of them are specialized in Chemistry and Biology. Take your chance and agree on a joint telephone call. You can request a free call-back without any obligations at: