Nestle KitKat vs. Cadbury: Next round, next defeat

Another defeat for the Swiss-based food giant Nestlé: The appeal against the decision of the High Court of England and Wales (EWHC) was rejected. KitKat can still not register the form of its “four-finger-bar” as a 3D trademark. The world market leader of the food industry Nestle has been trying to obtain a trademark protection claim for its well-known KitKat bar for a long time. They believe that the “iconic” form of KitKat deserves to be protected as a trademark. Here the whole story:

First registration successful, but Cadbury has something against it 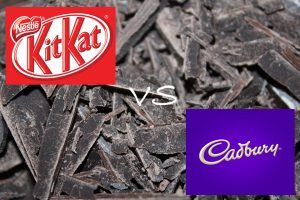 Nestlé appealed against the verdict and moved to the Court of Justice of the European Union (CJUEU). However, his judgment did not clearly answer the question of acquired distinctiveness. The appeal was therefore restored for the EWHC.

Chocolate bar not visible through packaging: No distinctive character

Nestlé’s petition was now again rejected two weeks ago by the EWHC. The reasoning of the judges states that the chocolate bar is not visible through the packaging. As a result, Nestlé can not prove the distinctive character of its chocolate. The fact that KitKat has had the same form since its founding in 1935 and therefore should be “protected as a trademark” is not sufficient as an argument from Nestlé’s side. Consumers link the form of the chocolate with KitKat though, but it is not the decisive criterion for the product as KitKat chocolate.

But in the opinion of Roland Mallinson (Taylor Wessing) the final verdict is not yet taken: “It means that with some concerted use in this manner and fresh evidence, the shape could still be registrable with a new application. However, it is probably easier and cheaper for Nestle just to appeal and that seems the likely course”

Not the first “chocolate fight” for KitKat

That Nestlé and Cadburry are conflicting about chocolate trademarks isn’t something new. In 2013, Nestlé won a legal dispute against Cadbury and thus prevented the registration of its violet color of chocolate packaging in the trademark register.

In 2016 we have already reported on two similar cases: The mexican multinational bakery product manufacturing company “Grupo Bimbo” also failed to protect their shape for a chocolate candy (CLICK for the full article). Like in the case of KitKat they lacked distinctive character. The Mars Inc. on the other hand was successful with the registration of the 3D trade mark of the bounty chocolate bar. They were then able to enforce their trade mark against product from a turkish company (CLICK for the full article).

Request a callback without any obligations: