After 9 years: Gucci and Guess end all trademark ligitations

After years of arguing over designs and brand logos before courts around the world, Gucci and Guess have now formally settled all disputes. The Italian luxury fashion label and the US fashion company have announced this in a joint statement. The terms of the agreement are not known though.

As a result of the agreement, both parties want to end all ongoing legal proceedings worldwide, in which the Italians in majority of cases accuse Guess the copying of their brand logo and design. “The agreement is an important step for both companies in recognizing the significance of protecting their respective intellectual property portfolios and design creativity,” both parties said in a joint statement. The conditions attached to this new peace agreement are not known. Until recently, there were still ongoing ligitations in Italy, France, Australia and China.

First time before court in New York in 2009

The first legal dispute between the two sides took place in 2009 before the New York Federal Court. The reason for this was a shoe model by Guess, which was designed very close to the design of a Gucci shoe. Especially the interlocking G-logo used on these shoes was the trigger for Gucci to file a lawsuit – it looked very similar to their own worldwide known logo. The allegations were product piracy, unfair competition and trademark infringement.

In 2012 then, Gucci emerged victorious in the case: An injunction was filed against 3 of the 4 accused designs. In addition, the luxury label based in Florence was awarded a compensation of $ 4.7 million – still much less than the $ 221 million they had hoped for.

Encouraged by this decision, Gucci then started legal action against Guess in other countries. 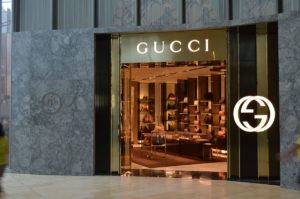 In 2012, the Italians filed a lawsuit against the trademark registration of the interlocking G logo of Guess before the EU court. Three years later the complaint failed with the reasoning of the EU court that “the signs in question produce a completely different overall impression, so that they can not be considered as similar” (We reported on it).

In Italy, Gucci accused the Americans of having copied their famous green-red-green stripe combination as well as several versions of their logo. But again a Milan court in 2013 ruled against Gucci, stating that Guess has used a different color combination and the logos were visually sufficiently different.

One of the bitterest defeats for Gucci followed 2015 in France: The Paris Tribunal de Grande Instance dismissed any allegation of trademark infringement against Guess and furthermore declared the Community trademark of the G logo of Gucci as invalid.

But 2013 in China and 2015 in Australia Gucci was victorious. In both cases Guess was convicted of trademark infringement and unfair competition.

With the agreement reached now, the final chapter in the long history of trademark disputes between the two parties seems to be over.

The fact that a luxury clothing label like Gucci has to defend itself against a so-called “copycat” is quite common. Last year Gucci was successful with a lawsuit against the fashion chain Forever 21 (Click here for our article). Forever 21 had copied Gucci’s blue-red-blue green-red-green trademark stripes.