The “saga” continues: adidas lost one of its 3-stripe Trademarks in the EU

Significant loss for the German sportswear giant: adidas has recently lost legal protection for one of its three-stripe Trademark. The reason is, that it did not enable consumers to identify such clothing items to be produced by adidas. So the TM does not amount to a valid trademark registration. Read more about the case:

Adidas is very active when it comes to protecting their stripes. Just a few weeks ago we wrote about the Trademark-Dispute with FC Barcelona – which was also about the three stripes. With this very recent case, the “three-stripes saga” continues.

In Case R 1515/2016-2, the European Union Intellectual Property Office (EUIPO) recently found that one of adidas’ European Union Trade Mark (EUTM) has to be invalid, because the mark did not enable consumers to identify clothing items as originating from a particular producer (=adidas). The accused Mark was registered for ‘clothing; footwear; headwear’ in Class 25 and is part of a group of “three-striped marks” owned by the German sportswear manufacturer Adidas AG. 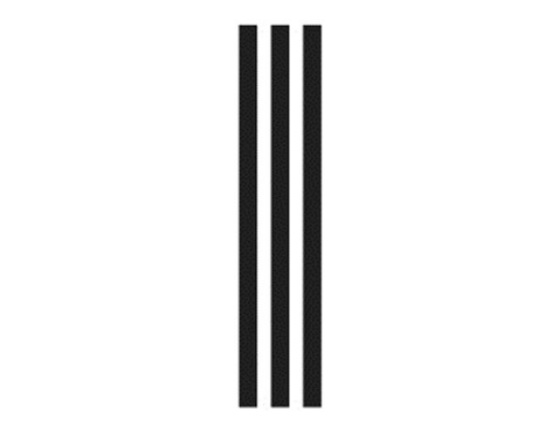 The Cancellation Applicant argued, pursuant to Article 52(1)(a) in conjunction with Article 7(1)(b) of the European Union Trade Mark Regulation (EUTMR), that:

– There is a contradiction between the mark type (figurative) and the description, which indicates ‘positioning’. The Office should have invited the cancellation applicant to remedy the discrepancy by changing the mark type to ‘other’.

– According to the Courts, the mark ‘type’ is essential for assessing the scope of protection. In this instance, it is uncertain and with a very broad protection for a wide range of goods. A formal deficiency should have been notified in respect of those goods for which the mark cannot be positioned in the way indicated in the description.

– The mark is devoid of any distinctiveness. It is a very simple geometric sign. It consists of no more than a repetition of a stripe three times, which may be used for decorative purposes. The sign cannot be distinguished from other common shapes found on clothing.

Adidas against the declaration of invalidity

The EUTM Proprietor claimed that the Courts had already confirmed the enhanced distinctiveness of the three-striped marks in the past. On 15 June 2015, the EUTM proprietor filed observations on the request for invalidity. Its reasons can be summarized as follows:

– The contested EUTM was registered despite a third party filing observations on its supposed lack of distinctiveness. The arguments filed then are essentially the same as those filed in these invalidity proceedings.

– The Courts have emphasised the enhanced distinctiveness of the many threestriped marks filed by the EUTM proprietor. The cancellation applicant itself has filed for several two-stripe marks; therefore, it is contradicting itself. The case-law cited by the latter supports the former in these proceedings. – The consumers of the relevant goods have been taught to recognise this mark as designating origin due to the significant and intensive use Adidas has made of the mark over the years. 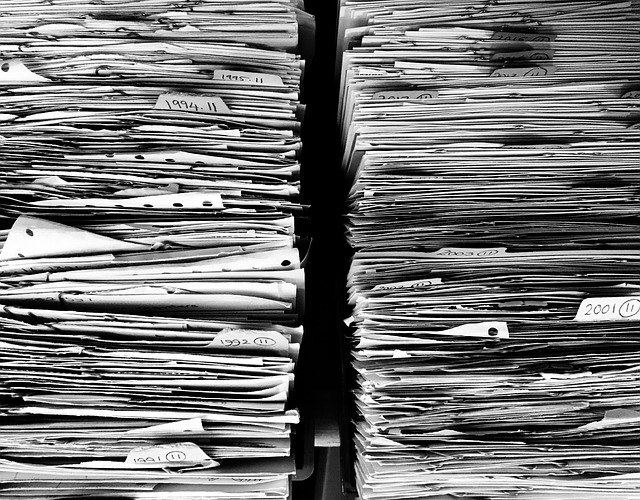 On 30 June 2016, the Cancellation Division (“CD”) issued its decision 10 190 C, which upheld the invalidity request in its entirety. The contested mark is likely to go unnoticed by most consumers or will not be perceived as a sign denoting a connection with a specific undertaking.

In reaching this conclusion the Cancellation Division notes that the sign consists of three normal black vertical equidistant lines. It is not stylised in any way. There is nothing about the sign that is apt to make it stand out in relation to the contested goods.

It is difficult to see why such a simple design in normal font and the colour black should attract the attention of the consumer, even a highly attentive consumer with a particular interest in trade marks and visual signs in general.

There is no reason to believe that consumers would assume that three straight black vertical lines in ordinary font is primarily intended to denote a connection with a specific provider of clothing, footwear and headgear products.

Since a sign consisting of nothing more than three straight black vertical lines is clearly capable of being used in many different contexts as a banal design or decoration, it is important to bear in mind the public interest underlying Article 7(1)(b) EUTMR, namely to avoid restricting unduly the availability of certain signs for other operators.
The Cancellation Division’s noted that “the number of available simple signs utilising straight vertical or horizontal lines is extremely limited, like the number of available colours, and there is an obvious danger that their availability for the purpose of indicating commercial origin would be unduly restricted if vertical or horizontal straight lines were treated as inherently distinctive. That is what the General Court means when it says that in view of the extent of the protection afforded to a registered trade mark the public interest underlying Article 7(1)(b) EUTMR is manifestly indissociable from the essential function of a trade mark.”

In early March 2017 the Second Board of Appeal (BoA) of the EUIPO confirmed the view of the Cancellation Division, dismissing adidas’s appeal. The BoA did not comment in detail on the EUTM’s inherent distinctiveness, since the EUTM Proprietor had apparently not disputed that part of the CD’s decision. As regards acquired distinctiveness, the BoA largely agreed with the conclusion of the CD.

In the BoA’s view, many exhibits provided by the EUTM Proprietor to prove use of the EUTM were of “doubtful value“. In the Board’s view, the following exhibits picked from the mass of evidence show doubtful use, because the marks here consist of two not three parallel black (or dark) stripes against a white (or lighter coloured) background: 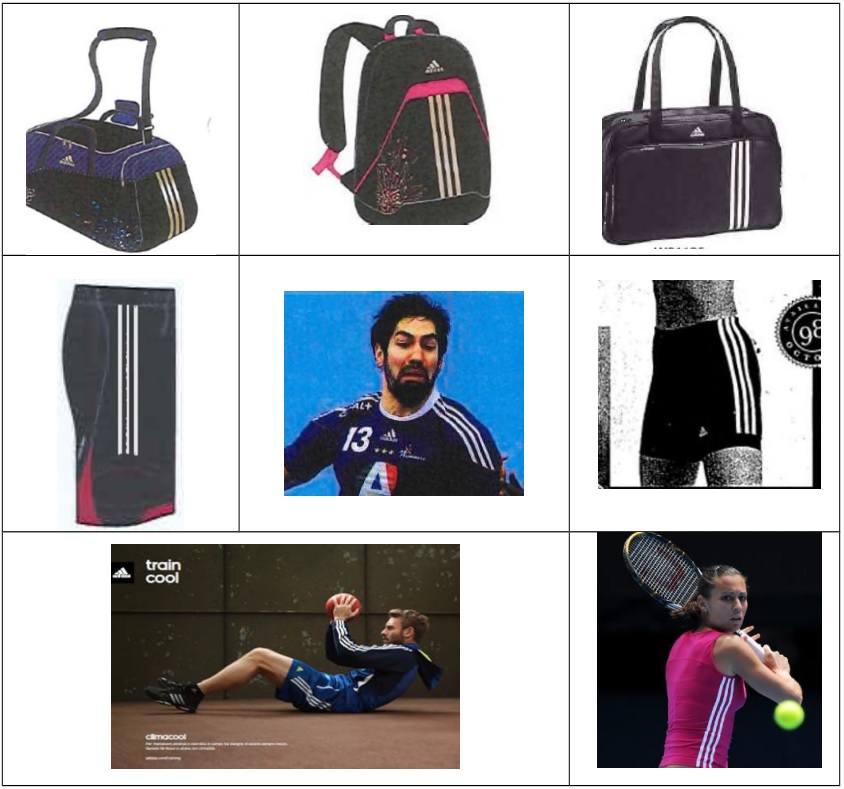 In the Board’s view, the following exhibits also have doubtful value: 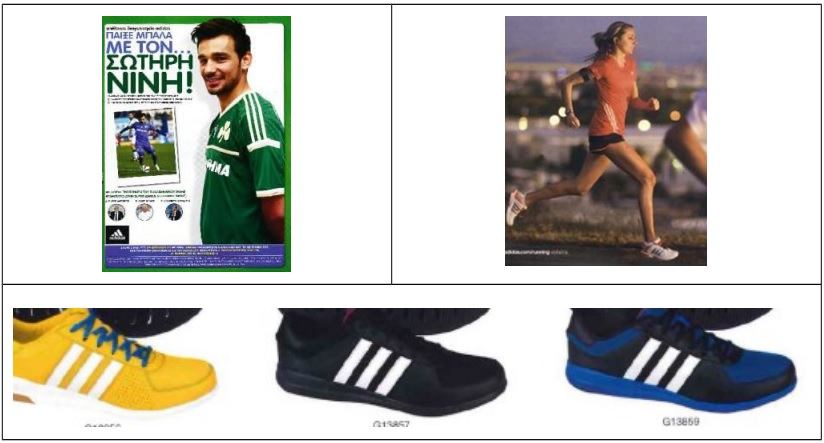 The BoA held that the decision of the CD had to be upheld and the EUTM declared invalid.

Conclusion: What do we learn from that case?! 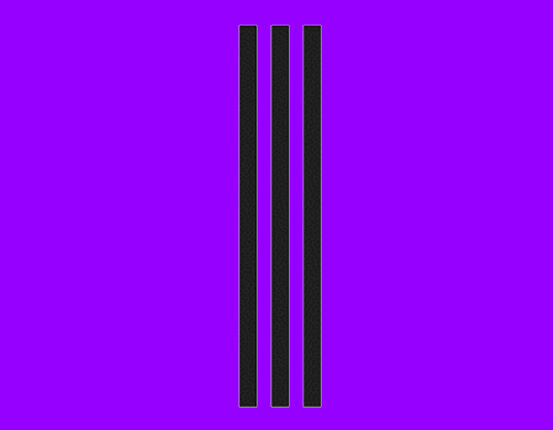 The decisions of the Cancellation Divison and EUIPO’s Board of Appeal sets the hurdles high for upcoming Trademarks (-applications), but also for the ones that a company owns, who wish to rely on their acquired distinctiveness before. The decision could also be a signal towards the fashion industry, keeping certain design elements (such as stripes) in the fashion industry free to be used.

Though, the EUIPO’s chain of reasoning is somewhat confusing: On the one hand the CD and BoA say that the stripes are “at least as likely to be perceived as a simple decoration on a shirt or hat“, but on the other hand arguing that it’s quite possible to perceive trademark protection for such design elements “if the contested mark contained something in addition to the three vertical lines, that is to say something that would draw attention to the lines or make them stand out against a particular background.

The lines might, for example, be stylised or placed inside a geometrical figure, such as a square, a circle or a pentagon or set into a differently coloured background.”

(Graphic above: This would have worked out, EUIPO huh?!)

With that statement it is quite sure that the EUIPO will have several discussions about such (design) trademarks. Although the standard recommendation for Trademark applicants is that your application should be held in black and white, the decision could change this view. If the applicants wants to be on the very safe side, he would try to protect the TM in every color he wants to use it in.

That would increase the number of applications, but also the amount of fees in total – and of course EUIPO’s profit …

Do you want to register or protect your Trademark?