Direct infringement of trademark rights in the trade with Mercedes-Benz wheel trims: with this accusation, Daimler AG brought charges against the online retailer Amazon a few days ago. Before a Californian court, the question now has to be clarified how far Amazon is legally responsible for the products that are traded on its platform.

Background of this lawsuit 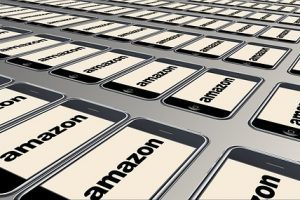 Amazon offers a trading platform for more than two million people in more than 100 countries. The online retailer allows manufacturers, wholesalers, retailers and other third party vendors worldwide to import, export and sell their products and promote them for this purpose. The main focus of Daimler’s indictment is on the products sold in the so-called “Fulfillment by Amazon” service. This distribution channel allows third parties to store their products in fulfillment centers and have them shipped to customers through the online retailer.

Such goods are listed as “products shipped by Amazon. com and sold by Amazon. com” – but in fact not only by authorized manufacturers and dealers. Amazon has long been criticised for not checking this too little. The well-known business magazine Forbes reported in February that the American online retailer made it easier to sell an exorbitant number of counterfeit and infringing goods (https://www.forbes.com/sites/wadeshepard/2017/02/14/how-amazons-wooing-ofchinese-sellers-is-hurting-american-innovation). According to the consumer organisation The Counterfeit Report, it has identified more than 32,000 unauthorised products.

In Germany, the online platforms Ebay and Amazon are also criticized by the federal and state financial authorities. It is assumed that foreign providers in particular do not pay any sales tax on these marketplaces deliberately or out of ignorance. This means distortion of competition to the detriment of domestic suppliers and the public purse. Damage is estimated to be in the hundreds of millions. There are plans to hold marketplace operators accountable, following the UK approach. Each supplier would then have to be marked with a sales tax identification number. In addition,”in accordance with applicable law, the inclusion of a legal provision for the introduction of a liability regulation or joint and several debtorship for the corresponding facts in the VAT Act[Sales Tax Act] is possible”, the FAZ writes in its article of 13 November 2017. However, this has no influence on Daimler’s charges against Amazon.

Daimler AG holds numerous trade mark registrations for the logos or design marks for Mercedes-Benz products, including cars, trucks and parts thereof (the “Mercedes-Benz brands”), national and international patents. As a long-standing manufacturer of brand-name cars, Mercedes-Benz brands were protected long before the online dealer even used them. In the negotiated case, the German automaker refers to five trademark registrations registered with the U. S. Trademark Office (USTPO) and currently in force (according to Section 7 (b) of the Lanham Act, 15 U. S. C.). § 1057(b))

Amazon offers three wheel trims on its trading platform which, according to Daimler AG, directly infringe the mentioned trademark registrations and are the subject of this case:

Daimler AG made a test run 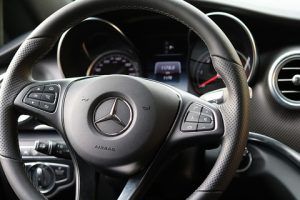 In August and October 2016, Daimler AG bought four of each of the three color variants known as Mercedes Wheel via the product detail pages of the trading platform. Amazon sent the desired articles. Daimler inspected all wheel trims maintained by Amazon. The test confirmed that these were unauthorized products.

Daimler AG uses a direct comparison with Ebay, a comparable online retailer, to argue its allegation. There, the majority of Otis LA’s offers indicate that the Center Caps are custom painted versions and they have a disclaimer of their own. There are no such references at Amazon.

Is an online platform responsible for its traded products?

Daimler AG is now suing Amazon before the United States District Court Central District of California in all relevant areas: trademark infringement, infringement of competition law and compensation for damages. The judgement will be of great relevance to many traders who sell their products through the popular trading platform. In the end, the court will have to clarify whether the operator of an online marketplace is responsible for the products he or she places on the market. This starts with packaging: can or must or may the platform operator know what is in the packages he stores and sends? So far, this is a legal grey area. And blooms wildly at the moment. For example, Amazon buyers in Florida were surprised to receive large deliveries of marijuana – without ordering it.