According to a new study, the financial damage caused by international trade with counterfeit products is to rise to around 940 billion euros by the year 2022. Furthermore up to 5.4 million people will lose their jobs thanks to activity by counterfeiting and piracy. We show the exact extent.

These frightening figures came to light in the recently published study “The Economic Impacts of Counterfeiting and Piracy“. The rapid increase in piracy is one of the core statements of the new study prepared by Frontier Economics.

Four years ago (2013) it was assumed that the damage would “only” be about 340 billion euros per year. 2017 this number has to be corrected – by further 600 billion euros. For many this number is a shock, because the damage almost tripled within such a short time. Many considered it impossible.

Product Piracy: In truth, the damage is even greater

The latest analysis of frontier economics reveals that imitation and product piracy are increasingly penetrating the economy of individual countries and sectors. Piracy has developed (worldwide) into a multi-billion dollar industry, which is growing ever more.

“This new study shows that the magnitude of counterfeiting and piracy is huge, and growing,” said Amar Breckenridge, senior associate at Frontier Economics. “Our objective is to as accurately as possible characterise the magnitude and growth of this illegal underground economy and its impacts on governments and consumers. The results show once again that in an interconnected economy, consumers and governments suffer alongside legitimate businesses from the trade in counterfeit and pirated goods.”

The makers of the study estimate that the value of national and international trade in counterfeit and counterfeit goods in 2013 was 710 – 917 billion US dollars. In addition, an estimated 213 billion are expected to be added, as they must also take account of counterfeiting from the film, music and software industries.

The negative forecasts up to the year 2022 must therefore be adjusted even further upwards: Within the next five years, the financial damage is to amount to 1.8 to 2.7 trillion euros.

As if this were not enough, up to 5.4 million jobs will be lost by product piracy by 2022, resulting in further financial losses of around 1.4 to 1.7 trillion euros: 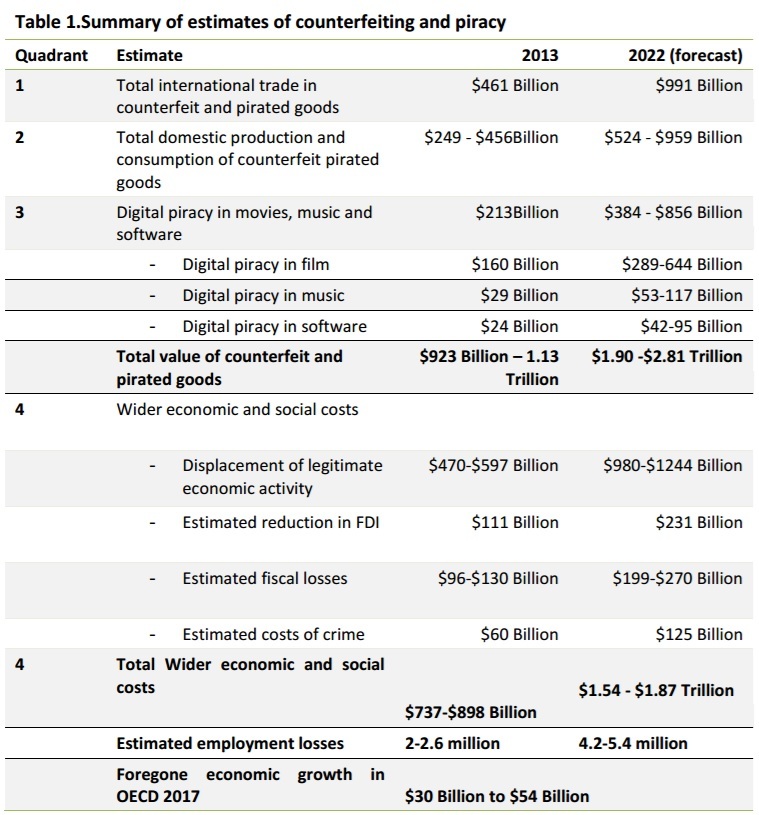 The study, conducted by Frontier Economy, was commissioned by BASCAP (Business Action to Stop Counterfeiting and Piracy) and INTA (International Trademark Association), and is based on a 2016 published OECD and EUIPO analysis (the Organization for Economic Cooperation and Development) Office of the European Union on Intellectual Property).

Are you also affected by illegal imitations and counterfeiting?

We should get to know each other! We help you actively in the fight against product piracy, because product piracy is not something to joke with!

Let us talk about your business today: