Unexpected judgement:  a Chinese court has been ordered three domestic shoemakers to pay the American footwear producer New Balance over 10 million yuan (US $1.5 million) and ruled them for trademark infringement of the “N” logo. This decision was made just in time at the beginning of the China Trademark Festival 2017, taking place in Guangxi, China,  September 1st to 4th. The judgement sets a signal for fair trade and trials und could establish welcome legal certainty for foreign companies and their trademark protection.

The ink has hardly dried on the newest issue of Donald Trump about investigation against China and it’s Intellectual property theft,  a Chinese Court surprises by announcing an unexpected judgement. In a legal dispute between brand shoemaker New Balance and three Chinese shoemakers the Suzhou Intermediate People’s Court, near Shanghai, held that the domestic footwear producer would infringe the American sportswear company’s signature slanting “N” logo. The Chinese court has ruled that the three domestic shoemakers must pay New Balance $1.5 million in damages and legal costs for the infringing the “N” logo. The involved Chinese shoemakers are Zheng Chaozhong, Xin Ping Heng Sporting Goods Limited Company and Bo Si Da Ke Trading Limited.

This decision is the more surprising because many critics claim that China’s restrictions lead to the theft of intellectual property. Especially the handling of US companies based in China led president Donald Trump to his investigation of the Chinese dealing with intellectual property. The main focus is on the requirements of the People’s Republic for foreign companies, after which the companies must their Chinese partners grant access to their technology. The court ruling might reflect the Chinese government’s determination to find a solution to the problem of piracy. 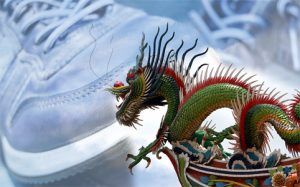 The case New Balance and it’s logo is therefore very interesting. New Balance was founded in 1906 and owns dozens of trademarks for their products. The sportive footwear was made famous by legendery Steve Jobs, who wore grey 991er sportshoes of New Balance as reported by German Wikipedia. With regard to the discussed N logo there are trademark protections for example for New Balance, the New Balance logo, the flying NB logo, the N design and the logos of New Balance Stores. Today, New Balance’s products are marketed in 120 countries on all continents. China has also become a production site for the American footwear company. New Balance has started it’s presence in China in 1995. In that time of economic boom in China many consumer producers recorded significant increases in sales volumes, and so did New Balance, too. Simultaneous the famous shoes attracted imitators, some of them copying everything about a brand. Counterfeiters themselves could try to register foreign trademarks using the Chinese rule that trademarks are awarded to the first company to file for them.

China has been strengthening it’s trademark laws since joining the World Trade Organization in 2001. But often foreign companies couldn’t get any far less any high damage awards. The US $1.5 million ruling now is a result of new trademark legislation in China that took place in 2014, though small by international standards. A new law include higher thresholds for statutory damages. The Chinese public authorities have made major advances in recent years concerning their possibilities to fight product and trademark piracy and trademark abuse.  The current judgment is a further strengthening for Western brands in an intellectual property infringement case in China, and moreover the damages are far larger than usually been granted by Chinese courts.

New Balance itself delivers a benchmark to the damage award.

“In April 2015, a Chinese court fined New Balance around US $16 million after it lost a lawsuit to a man who had registered the trademark for the Chinese name of New Balance. The American company appealed and the fine was later reduced to about US $700,000. New Balance is appealing the decision, which would go to China’s Supreme Court, according to Daniel McKinnon, New Balance’s senior counsel for intellectual property.

Chinese law does not follow precedent, but courts around the country do look to decisions nationwide for cues. As a result, Scott Palmer, an intellectual property lawyer at Sheppard, Mullin, Richter & Hampton, which represents American corporations in China, said the New Balance ruling bodes well for a number of cases that he has before the courts.”

Another famous legal case in the world of sport sent a message of the Chinese government of fighting against trademark piracy, too. Since 2012 the basketball star Michael Jordan sued a Chinese sports article manufacturer “Qiaodan”, that used the Chinese version as name for the company and for marketing (Qiaodan, pronounced “chee-ow Dahn,” is a mandarin transliteration of “Jordan”).  Moreover the Chinese defendant also provided it’s products with the logo “Jumpman”, that looked very much like the designed basketball player on the “Air Jordan” products by the US manufacturer Nike. Michael Jordan has failed in his claim in summer 2015 before the Beijing Municipal High People’s Court, but in December 2016 China’s Supreme People’s Court has ruled the Chinese “Qiadon” company for trademark infringement. Maybe confidence can be renewed in the protection of intellectual-property in China.

You want to protect your brand for the Chinese market? Read more articles about Chinese trademark protection!

You wonder how to protect your trademark in China?

You can request a call-back without any obligations at: