In a recent press article WIPO released their “World Intellectual Property Indicators – Report 2016” stating that Innovators from all around the world reached a new record in Patent, Trademark and Industrial Design Applications. Nearly 3 Million Patent-, 6 Million Trademark- and 870.000 Industrial Design-Applications were filed in 2015. Trademark Applications rose up to 15%. One country really stands out from all the other countries …

Strong Growth: “Innovation Flying High” – and the Rise of China

Innovators in China powered global patent applications to a new record in 2015, filing more than a million applications for the first time ever within a single year amid rising worldwide demand for intellectual property rights that undergird economic activity.

In total, innovators around the world lodged some 2.9 million patent applications in 2015, representing a 7.8% increase over 2014 and the sixth straight year of rising demand for patent protection, according to WIPO’s annual World Intellectual Property Indicators (WIPI) report. Trademark applications jumped by 15.3% to about 6 million in 2015, as worldwide industrial design applications grew by 2.3% to 872,800. 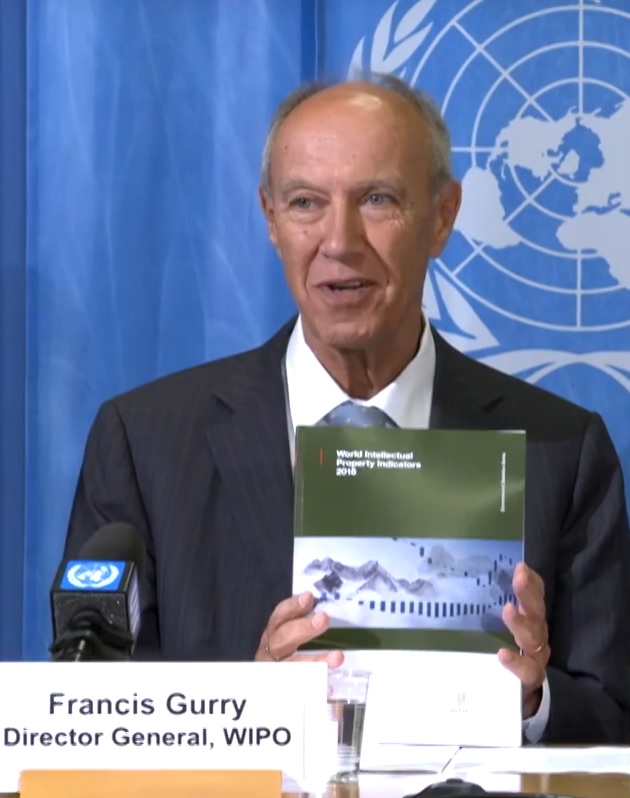 “As policy-makers seek to invigorate growth around the world, it is encouraging to report that intellectual property filing activity saw healthy progression in 2015,” said WIPO Director General Francis Gurry.

“While China continues to drive global increases, IP use grew in most countries in 2015, reflecting its increasing importance in a globalized knowledge economy.”

In total, innovators filed some 2.9 million patent applications worldwide in 2015, up 7.8% from 2014, higher than the 4.5% growth rate in 2014. Resident filings, where innovators filed for protection in their home economy, accounted for around two-thirds of the 2015 total.

China’s patent office received 1,101,864 filings in 2015, making it the first office to receive more than a million applications in a single year – including both filings from residents in China as well as from overseas innovators seeking patent protection inside China. This totaled almost as many applications as the next three offices combined: the U.S. (589,410), Japan (318,721) and the Republic of Korea (213,694).

Though innovators based in China filed comparatively fewer overseas applications (42,154), that figure has risen steadily over the past two decades and now nearly equals the total of France (46,581).

An estimated 6 million trademark applications covering 8.4 million classes were filed globally in 2015.1Largely driven by China, applications increased by 15.3%, which represents the highest growth since 2000. Around 78% of global filing activity can be attributed to resident applicants that filed for protection in their own country.

Around 4.4 million trademark registrations covering 6.2 million classes were recorded worldwide in 2015. This was a 26.6% increase on 2014 and the fastest growth in over 15 years.

Designs related to furnishings accounted for 9.4% of all filings, followed by those related to clothing (8.3%) and to packages and containers (7%).

The total number of industrial designs registered worldwide increased by 21.3% in 2015, mainly due to strong growth in registrations in China.