The US manufacturer Crocs loses the ligitation over the design of their famous plastic shoes. The General Court of the European Union upholds the ruling of the EUIPO that in 2005 the design protection was wrongly granted. The shoe design had been public for more than twelve months before the application for protective rights.

You hate them or you love them, the colorful holey rubberclogs based on the Dutch original. Because the US company Crocs loses its design rights for the iconic shoes in Europe, others are now allowed to produce the shoes, too. But what happened? 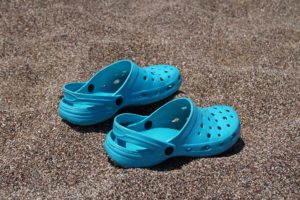 On November 22, 2004, the US company Western Brands LLC registered the Crocs design as a Community Design at the European Union Intellectual Property Office (EUIPO). The application to the EUIPO was preceded by a US patent application of 28 May 2004.

The Community design, approved in February 2005, was then transferred to Crocs on 3 November 2005.

8 years later, in 2013, the French company Gifi Diffusion turned to EUIPO for a declaration of invalidity of the design. The French were of the opinion that the registered Croc design lacked novelty under EU trade mark law.

The EU trade mark law states that all designs that are known to the market for more than 12 months prior to the priority date (in this case the filing of the patent application in the USA) are not considered new and therefore no longer eligible for protection.

On June 6, 2016, EUIPO agreed Gifi Diffusion’s declaration of invalidity because: The shoes in the protected design had already been presented and put up for sale 12 months before the deadline on the Crocs website and at a trade fair. Therefore, according to the EUIPO, the design of the design application was missing novelty.

Crocs appealed against decision at the EU General Court

Crocs brought an action against EUIPO’s decision before the General Court of the European Union. Crocs was of the opinion that the disclosures made could not have been known to the professional circles of the industry concerned in the normal course of business in the EU.

Because the nautical fair in Fort Lauterdale, on which the shoes have been presented, was known to international experts and the website has worldwide access. Finally, Crocs could not prove that the design of their rubber shoes had not been made public by at least one of the revelatory acts prior to the deadline.

Thus, the ECJ dismissed the action brought by Crocs and upheld the decision of EUIPO (judgment of the General Court in case T-651/16).

Text: Curia Documents, Judgment of the General Court of the European Union of 14 March 2018