No warm socks on top when buying medicines in the pharmacy! This is because German pharmacists are not allowed to grant any monetary benefits when purchasing price-linked medicines, such as vouchers, discounts or advertising gifts. This is true, although the ECJ ruled differently on price fixing, the OVG Münster recently ruled and the OLG Frankfurt also ruled, published yesterday. 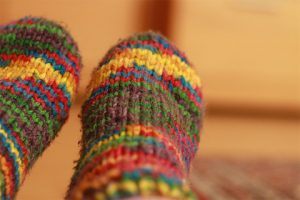 It is forbidden for German pharmacists to deviate from the uniform price resulting from the drug price regulation. The addition of cuddly socks when buying medicines would be a violation of the price maintenance (medication products law § 78. 1. + 78.2.) This also applies to the granting of discounts or other price reductions as well as to benefits and advertising supplements (medical products advertising law § 7.1 Nr. 2). Advertising is also prohibited. Monetary benefits may not be granted on any price-based medicinal products at all, this applies to both prescription and other price-based medicines.

The plaintiffs in this case are two pharmacists from North Rhine-Westphalia. In 2013 and 2014, the two plaintiffs issued vouchers that could be redeemed when the prescription was handed in. For example, pharmacy customers received a roll of gift wrapping paper and a pair of cuddly socks for the vouchers. The Apothekerkammer Westfalen-Lippe judged this to be a violation of the price fixing for prescription drugs and therefore demanded to refrain from issuing such vouchers. The plaintiffs turned against this. They argue that the judgment of the Court of Justice of the European Union of 19 October 2016-Rs C-148/15 calls into question the validity of the price fixing of medicines for German pharmacies as well.

The OVG Münster confirms the dismissal of the complaint

At the same time, the court also confirmed that it is forbidden for German pharmacists to depart from the uniform price resulting from the drug price regulation. In particular, the granting of discounts or other price reductions as well as for donations and advertising gifts and for advertising are mentioned. This applies despite the judgment of the ECJ last year. In this ruling (C-148/15), the European Court of Justice stated that the German price fixing for pharmaceuticals does not apply to foreign pharmacies when dispatching medicines to German customers.

Judgment C-148/15 of the ECJIn the judgment of the European Court of Justice, the German Parkinson Association (DPV) brought an action against the Central Office for Combating Unfair Competition (“Zentrale zur Bekämpfung unlauteren Wettbewerbs e. V.”) concerning the fixing of uniform pharmacy sales prices for prescription-only human medicines in German law. The reason for the dispute was the different treatment of Union and national law in relation to fixed prices. The DPV is a self-help organisation for Parkinson’s patients. In July 2009, the DPV promoted a cooperation between the DPV and the Dutch mail-order pharmacy DocMorris, and presented its members with a bonus system that provided for various bonuses for prescription Parkinson’s medications available only from pharmacies when they were purchased by members of the DPV of DocMorris.

The European Court of Justice ruled on the free movement of goods via fixed prices for prescription drugs in Germany. The DPV won the lawsuit and the European court allows the members to benefit from discounts. The court argued that traditional pharmacies are generally better placed than mail-order pharmacies to provide patients with individual on-site advice and emergency medical care. Since mail-order pharmacies cannot adequately replace such a supply with their limited range of services, it can be assumed that price competition is a more important competitive factor for them than for traditional pharmacies, because it depends on them whether they can gain direct access to the German market and remain competitive on it.

The Court also pointed out that this did not affect its assessment of the price maintenance rules. As regards national measures in the field of public health, the Court of Justice has ruled on several occasions that, among the goods and interests protected by the Treaty, human health and life are of the highest priority and that it is for the Member States to determine at what level they wish to guarantee the protection of public health.

The OVG Münster and the OLG Frankfurt therefore followed the ruling of the European Court of Justice, as it allows national regulations on price fixing and its enforcement for medicines. It is often criticised that this ruling for domestic pharmacists is also a form of discrimination of German pharmacists. In the case of the bread roll vouchers from the pharmacy in Darmstadt, the OLG Frankfurt clearly named the discrimination against German nationals. In view of the fundamental importance of the question of discrimination against nationals, the Senate has allowed the revision “, the OLG’s press release states in a concise and clear manner. And it will be interesting to see if and when the national legislator will adapt the German regulations to European reality.

Do you need an attorney for in national or European competetion rules?