BURBERRY has filed a lawsuit against the rapper Burberry Perry, claiming that there is a “clear attempt to trade off of the fame and goodwill” of the luxury house. In this case, the fashion label should win it with ease since the infringement is just far too obvious …

Burberry has filed 48-site lawsuit against the Atlanta-based rapper/producer Perry Moise aka. Burberry Perry in New York federal court, alleging that he is infringing its trademarks by calling himself Burberry Perry and using its federally registered check pattern and equestrian trademark in connection with his album and social media pages. He was accused of using the plaintiff on purpose to show that he is somehow associated with the luxury brand Burberry. Burberry is also claiming “trademark dilution” which would be an even easier case to for the label to win.

The rapper, who used the Burberry plaid and horse logo on his self-titled mixtape, has been sent multiple cease and desists letters, which he ignored. Now the fashion label from the UK takes legal action. “As a global luxury brand, Burberry considers the protection of its intellectual property vital for the health of its business and to safeguard its customers“, said a spokesperson from the brand.

Unlike the legal protection afforded by copyright and patent law, which lasts for a fixed duration, trademark protection can potentially last forever, but only if the trademark does not become generic – the instance when the public begins using the trademark as the name of a product itself as opposed to identifying an exclusive source of a product.

In light of the lawsuit, Perry has changed his artist name in favor of a new one: TheGoodPerry. But that won’t help him all to much … 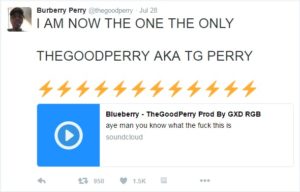 Does anyone infringe your intellectual property such as a trademark?

Our Trade Mark Attorneys know what they are doing. We help you protecting your brand and go through all legal instances with you! Request a call-back from one of our Trade Mark experts: