The Frankfurt Regional Court has issued an injunction against the current sale of the PUMA hoodie with the clothing print BLESSED: PUMA infringes the rights of the trademark #BLESSED. Our law firm Meyer-Dulheuer achieved a considerable success in this trademark dispute – for the time being. 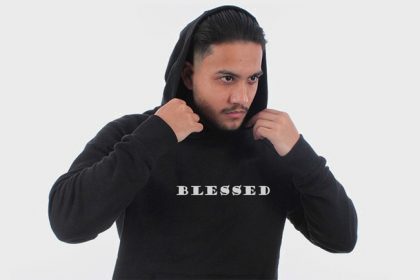 Does the printing of a protected trade mark on a T-shirt or a jumper be a trade mark infringement? This is a question that is often asked. And the answer is clear: as soon as a consumer could be misled about the origin of the goods by the imprint of a protected sign or word, an infringement is to be assumed.

In the present case, which was decided today by the Regional Court of Frankfurt (LG Frankfurt, 9th november 2021, 2-06 0 291/21), it was about a PUMA hoodie from the new collection with the clothing print BLESSED. The applicant for the interim injunction, Mr Amarnath Kakar, considered this PUMA hoodie to be an infringement of his own registered word mark, the sign #BLESSED, registered as German trade mark since 20 April 2021 (DE 302020112652).

Mr Kakar had acted immediately after becoming aware of the distribution of the PUMA hooded sweatshirt BLESSED. However, neither in response to the question of entitlement of 7 October 2021 nor in response to the warning letter of 25 October 2021 had PUMA Europe GmbH made the requested declaration that PUMA would cease using the BLESSED sign in future.

Mr Kakar therefore filed an application for an interim injunction against PUMA, which was granted today by the Landgericht Frankfurt. PUMA Europe GmbH is prohibited from using the designation BLESSED in the course of trade in the Federal Republic of Germany – on grounds of urgency with an order to pay a fine.

High distinctiveness of the mark #BLESSED

In this context, the Regional Court of Frankfurt emphasised the particularly high distinctive character of the protected trade mark #BLESSED, which, in addition to goods in class 25 (“clothing”), also claims trade mark protection for services in classes 25, 41 and 43. This is because Mr Kakar, as a restaurateur and event planner, already operates a #BLESSED shop in the centre of Frankfurt and is currently opening another shop in Gießen. Therefore, the applicant has a high media reach, which he also makes his own through clothing of his brand #BLESSED, the LG Frankfurt explained.

The Landgericht Frankfurt also assumed that there was a risk of repetition, as PUMA was selling the Hoody in dispute as part of its new collection, both online and in retail shops. A ground for the interim injunction was therefore given, which resulted from the current sale of the hooded sweatshirt in dispute – and was also to be presumed pursuant to § 140 (3) MarkenG.

The Court LG Frankfurt referred to the fact that both parties to the dispute sold – partly identical – clothing and were thus competitors. The court considered it proven that PUMA also infringed the applicant’s competitive positions through its conduct. The court stated that PUMA “obviously assumed that it could not convey a misleading impression” on the basis of its own name recognition, as Mr Kakar was not so well known. However, the LG Frankfurt emphasised, it is precisely Mr Kakar who is the trademark owner of the disputed trademark #BLESSED and who rightly claims trademark protection from it.

In the end, the LG Frankfurt set the amount in dispute rather high. The Regional Court explained that this was appropriate, as it concerned infringements under both trade mark law and competition law. Since the defendant PUMA is the better-known party, Mr Kakar must fear for the economic value of his infringed trademark – possibly even for his business basis. Therefore, the value in dispute must also take into account a so-called attack factor due to the dangerousness of the infringement for the applicant according to court.

However, the decision of the LG Frankfurt is not yet legally binding and can be appealed against. Anyway, our law firm Meyer-Dulheuer, as the applicant’s legal representative, achieved a considerable success in this trade mark dispute – for the time being.

Any protection or defence for your trademark wanted?

Cup as a 3D mark: appearance of the goods themselves

AC MILAN: No protection for stationery