From our own experience we can say that is very difficult to get legal protection for a 3D Mark (in China), especially when you want to protect the outer appearance of your product. Consumers as well as some People’s Courts tend to treat the outer appearance (such as a bottle) as container or packaging rather than as a trademark that cleary indicates the source of the products. But in this case Chivas submitted sufficient evidences of use of the 3D marks, proving that consumers actually treat the bottle of “Royal Salute” as a trademark, and are able to distinguish the products from others through the shape of the bottle only.

Chivas is the owner of the trademarks “Chivas Regal” (Figure 1), “Chivas Regal and its device” (Figure 2), “Chivas Brothers” (Figure 3), as well as a three-dimensional trademark (Figure 4) covering the goods “alcoholic beverage” in class 33. 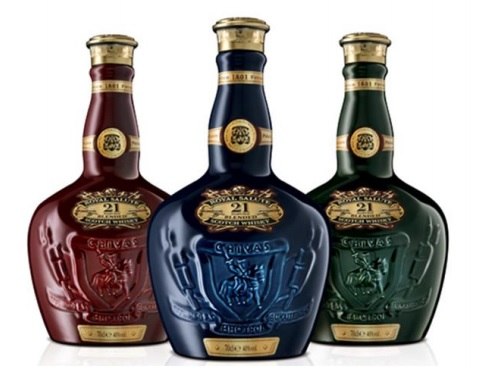 Royal Salute is a brand of Scotch whisky produced and launched by Chivas Brothers in tribute to Queen Elizabeth II on the day of her coronation. Named after the traditional 21-gun salute, the premium Scotch whisky is aged for a minimum of 21 years. Chivas Holding (IP) Limited (“Chivas”) owns 4 three-dimensional (3D) registered trademarks of the bottle shape of Royal Salute whisky in class 33, covering the goods of alcoholic beverage, whisky, wine, aperitifs, etc.

The four marks are almost identical, except for their designated colors: ruby (red), sapphire (blue), emerald green (green), and no designated color. You can see the different bottles with its distinctive shape on the right. 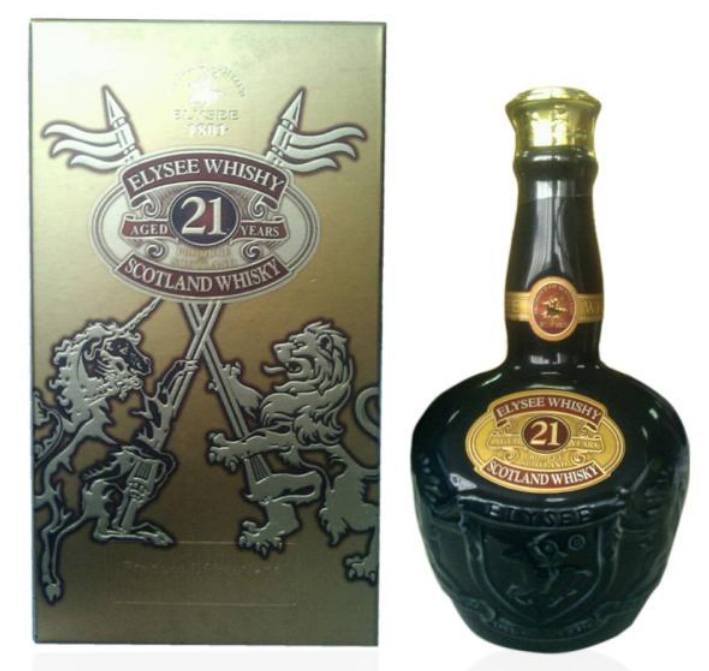 The bottle of the product is an obvious copycat of the bottle of the Chivas Regal 12 Years Old brand, which was registered as a 3D trademark. But not just the shape was copied, the label and packaging were also copied from the label and packaging of the Chivas Regal 12 Years Old product. To top things off, the characters marked at the bottom of the Yantai Chivas bottle were the same as the Chivas registered trademark “Chivas Brothers”.

On December 26, 2014 Chivas filed a lawsuit against the manufacturer and the retailer on the ground of trademark infringement and unfair competition.

In the first instance, the Hangzhou Intermediate People’s Court recognized that, other than a trivial difference, they are visually identical. The Court further confirmed that Chivas 3D mark is highly distinctive. Even though Yantai did use its registered trademark “ELYSEE” on the accused products, such use did not change the Court’s finding on trademark infringement. The packaging of the accused products is similar to that unique packaging, which is likely to cause confusion and misidentification among the relevant public, about the source of the products.

The Court held further that Royal Salute whisky has long history and is widely distributed in terms of geographical coverage. Chivas has invested heavily in its advertisement and promotion so that the product is reputable and is known by the relevant public. Therefore, the product may be considered as a well-known commodity as provided by the “Anti-Unfair Competition Law”.

In accordance with the Trademark Law of China, the court ordered the defendants to immediately cease the infringing acts, make a public apology in the newspapers, and pay an amount of RMB 500,000 (72,000$) as damages.

Yantai Aowei appealed against the first instance Judgment, but without any convincing evidence or argument. Finally, the Zhejiang High Court rejected their appeal, and sustained the judgment of the first instance.

Do you want to protect your (3D) Trademark in China too?

Then we should get to know each other! Our Patent Attorney Ms. Junyi Zhu will guide you through the whole procedure so that you can lean back!

Let us talk about your Trademark and Business today: