The winners of the European Inventor Award 2016

The European Patent Office (EPO) showcased the best and brightest in innovation today at the European Inventor Award 2016 ceremony in Lisbon. Now in its 11th year, the award is presented annually by the EPO to recognise outstanding inventors from Europe and around the world, who have made an exceptional contribution to social development, technological progress and economic growth.

“Today’s award ceremony is a tribute to the spirit of innovation and the work of dedicated individuals who through their inventions advance the state of the art for all of us,” said EPO President Benoît Battistelli. “The inventions recognised with this year’s award give new hope to people suffering from disease, increase diagnostic efficiency, protect the environment and save thousands of lives on the road. The significance and impact of the work of these inventors underlines the importance of the European patent system for the benefit of economic strength and technological progress in Europe,” said Mr Battistelli.

Nearly 600 prominent guests from the areas of politics, business, intellectual property and science were in attendance at Lisbon’s MEO Arena as the EPO President, Portugal’s Prime Minister António Costa and European Commissioner for Research, Science and Innovation Carlos Moedas opened the award ceremony.

Leading up to the ceremony, an independent international jury had selected 15 finalists– three in each of the five award categories – from more than 400 proposals. To qualify for the award, the proposals had to meet specific criteria, including that the inventor had to have been granted at least one European patent for their invention by the EPO. 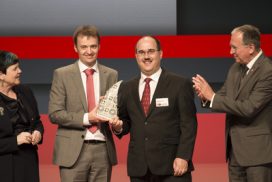 Germany physicists Bernhard Gleich and Jürgen Weizenecker and their team received the award for laying the foundation for a new category of medical imaging solutions. Developed in the laboratory of Philips Research Hamburg, magnetic particle imaging (MPI) offers real-time images of body tissues in unprecedented quality.

The Danish research team received the award for the ground-breaking application of ammonia in solid form to reduce air pollution from diesel engines and act as an emissions-free fuel. Released into the exhaust system of diesel engines, it can reduce the amount of harmful emitted NOx (mono-nitrogen oxides; a key component of smog) by up to 99%. Theirs is a true start-up success story powered by patented inventions. More information can be found here. 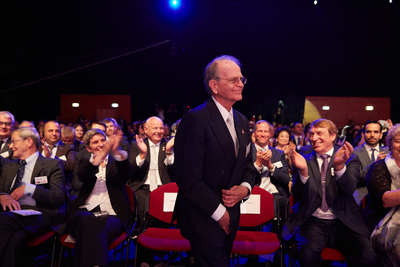 French physicist and neurosurgeon Alim-Louis Benabid was honoured for revolutionising the treatment of Parkinson’s disease and other neurological conditions with the use of high-frequency deep brain stimulation.

Based on controlled electric charges administered via a probe implanted into the patient’s skull – akin to a “brain pace-maker” –  Benabid’s method has become a standard treatment around the world, and has benefited over 150 000 people, who can now lead self-directed, independent lives thanks to the invention. More information can be found here.

US chemical engineer Robert Langer received the award for the ground-breaking invention of biodegradable plastics that encapsulate powerful anti-cancer drugs for a new level of targeted delivery. His bioplastics can be shaped into “wafers” filled with cancer-starving drugs, implanted right above the site of tumours where natural degradation releases the drug for maximum efficacy.

Langer’s patented inventions have been licensed to more than
300 pharmaceutical companies and have already benefited more than one million people worldwide. The prolific inventor heads a team of over 100 researchers at MIT. More information can be found here.

Engineer Anton van Zanten was honoured for his landmark contributions to automotive safety systems that have saved thousands of lives and are now mandatory features in new automobiles.

Throughout an automotive engineering career with German company Robert Bosch spanning more than 40 years, van Zanten pioneered the electronic stability control (ESC) system and other solutions to prevent automobiles from veering off the road and crashing in extreme braking situations. More information can be found here. 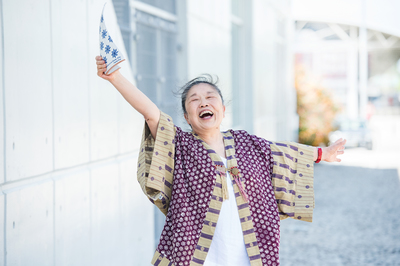 Cambridge University researcher Helen Lee was picked by an overwhelming majority of the public to receive the Popular Prize for her invention of diagnostic kits for resource-poor regions of the globe. Already used to test more than 40 000 people, her robust, instant blood diagnostic kits are cost-effective and easy-to-use for detection of infectious diseases such as HIV, hepatitis B and chlamydia.

Lee received more than 36 300 votes, or 64%, of the total record number of 56 700 votes cast online by the public in the five weeks leading up to the award ceremony (up from 46 800 total votes last year). This was by far the highest number of public votes ever received by any European Inventor Award finalist since the launch of the Popular Prize category in 2013. More information about Helen Lee can be found here.

About the European Inventor Award

The European Inventor Award, now in its 11th year, is one of Europe’s most prestigious innovation prizes. Launched by the European Patent Office (EPO) in 2006, the annual award distinguishes individual inventors and teams of inventors whose pioneering inventions provide answers to some of the biggest challenges of our times.

The winners are selected by an independent jury consisting of international authorities in the fields of business, science, academia and research, who examine the proposals in terms of their contribution towards technical progress, social development, and wealth and job creation in Europe. The general public also takes part in conferring the award: the winner of the Popular Prize is chosen from among the 15 finalists by online voting.

Do you want to be the winner next year?

We would be happy to help you with your patent registration! 🙂

Extensions of claims at the appeal stage