A patent for a robot-controlled production line system was granted by the BPatG after a successful appeal. The patent application had initially been rejected by the DPMA because the main claim was considered to be close to the skilled person. 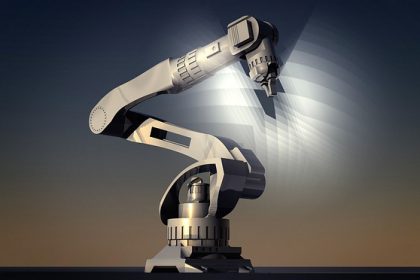 By decision of 22 March 2019, the DPMA had refused to grant protection for the main patent claim of patent 10 2005 051 094.9, which was entitled “Production line system for robot arm workstations”. The subject matter of claim 1 had been obvious to a person skilled in the art, the DPMA justified this decision. The patentee, Denso Wave Inc. (Japan) filed an appeal against this decision.

In its current decision 11 W (pat) 17/19, the Federal Patent Court allowed the appeal. Decisive for the decision are the publications D1 to D6 published before the patent application, all of which also deal with a robot-controlled production line system.

The patent application in dispute from Japan concerns a robot-controlled production line system in which a specified work is carried out on each material or product element that is transported on a conveyor system. According to the patent description, the task to be solved by the underlying invention is to create a production line system for robot arm workstations, which enables the establishment of communication with data carriers according to a sufficient time interval for data read/write operations. According to the patent description, the data carriers are arranged directly on the workpiece. In addition, the invention provides for read/write devices on the robot arms as well as a step and tracking control.

Previous knowledge of the technology in D1 to D6?

The documents D1 to D6 also describe a production line system with robot arms, therefore the Federal Patent Court (BPatG) dealt in particular with the positioning of the data carriers in the documents and – if available in the documents – with the step and tracking control.

The BPatG dealt with the publication D5 for a longer period of time, which is a German version of D4 with a U.S. invention for a production line system with a conveyor system for workpieces. The doctrine of publication D5 includes that from the time of determining the position of the piece goods until the start of the approach movement, the calculation algorithm follows the piece goods purely by calculation or keeps pace with the piece goods, depending on the starting position of the robot arm. In particular, however, it did not describe a time span in which the gripper element follows the piece goods in speed and direction after reaching them. The BPatG judged that this could not be attributed to the demanding step or tracking of the robot arm at the same speed and direction as the workpiece for a certain period of time.

Consequently, the court decided according to §§ 1, 4 German PatG that the objects are based on an inventive step according to the independent patent claims of the version of the main application. None of the publications D1 to D6 teach to form a step and tracking control, so the invention also fulfils the requirement of novelty.

Close to the expert? BPatG denied

Was the invention based on a robot-controlled production line system nevertheless obvious to the skilled person, close to the expert, as the DPMA had decided? The court denied. Claims 6 and 9 were broader than claim 1, since in particular the type of data to be exchanged was undefined. Nor would a skilled person be encouraged to operate a production line system according to claim 9 with regard to a corresponding stepping and lane keeping function.

The BPatG therefore concluded that the overall consideration of the prior art did not suggest the solutions proposed with the independent patent claims according to the main request and withdraw the decision of the German Patent and Trade Mark Office (DPMA) of 22 March 2019.
Claims 1 to 15 according to the main request of the patent application “Production line system for robot arm workstations” from the patent documents of 16 October 2015 were granted for protection.

In contrast, the present case concerns the use of classical industrial robots with supplementary data transmission. Here, as in the present case, it is often not the basic patentability that is in question, but rather the examination of whether the invention differs sufficiently from previous knowledge of the technology. It is decisive that the patent claims are very carefully drafted and formulated.

In this context, our blog post Comparative Study EPO and CNIPA: Computer-implemented Inventions may also be of interest to you.

Do you also need support in securing your patent rights?

Do you need support in securing your patent rights for patents of program code, software, AI or industrial robots?
Each case is considered individually and carefully. Our lawyers have many years of expertise, both nationally and internationally, including protecting and defending patent rights in China.
You are also welcome to use a non-binding callback appointment with us!